It was termed natura­l phenom­enon that occurs when whales get disori­ented and are unable to swim back into deep water.
By AFP
Published: October 25, 2012
Tweet Email 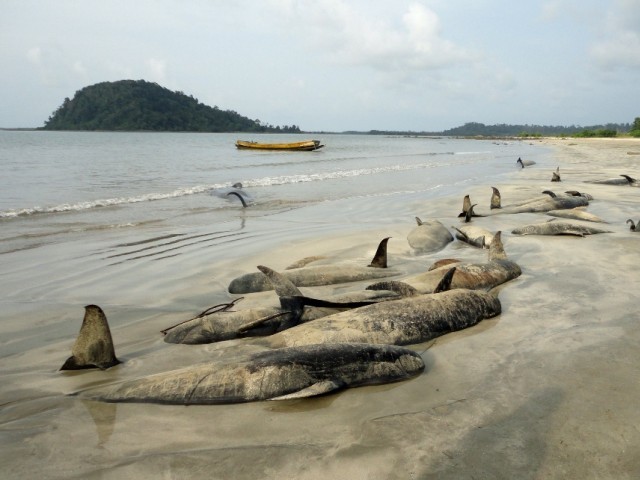 In this handout photograph released by the Andaman and Nicobar Islands Department of Environment and Forestry on October 25, 2012, over 40 short-finned pilot whales lie on the beach in a mass stranding on the west coast of the remote Indian Andaman islands in the Bay of Bengal on October 25, 2012. PHOTO: AFP

NEW DELHI: About 40 whales died in a mass stranding on the west coast of India’s remote North Andaman island in the Bay of Bengal, wildlife officials said on Thursday.

“The short-finned pilot whales were found by fishermen who alerted us and investigations show it was a case of mass stranding,” said Ajai Saxena, a wildlife official in Port Blair, capital of the islands.

Saxena said no previous mass stranding had been reported in the Andamans, but that it was a natural phenomenon that occurs when whales get disoriented and are unable to swim back into deep water.

Stranding is also thought to occur when a pod follows a sick or an injured whale into the shallows, experts say.

Emergency teams and local volunteers headed to the beach near Elizabeth Bay on the North Andaman island where the whales were stranded, but they were unable to help.

“The mammals are so heavy, it is impossible to move them back to the waters,” Saxena told AFP.

A post-mortem has been conducted on one of adults, which weighed two tonnes.

The Andaman and Nicobar islands are Indian territory, though they are at least 600 miles (1,000 kilometres) from the mainland and are closer to the coast of Myanmar.