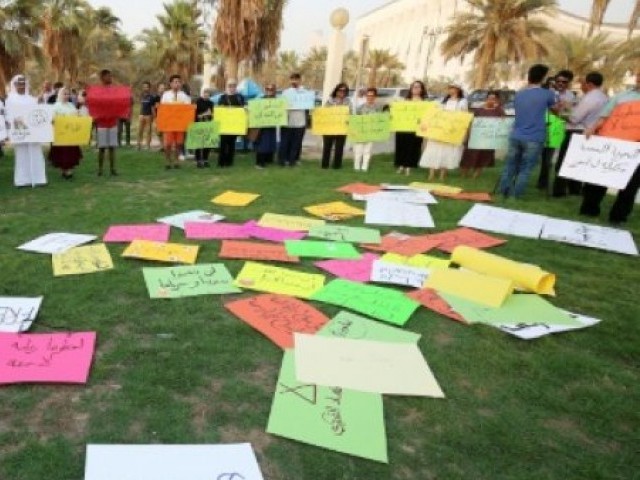 © AFP/File | Kuwaitis gather outside the National Assembly on September 15, 2018, to protest against the government's banning in recent years of publications including the Hunchback of Notre-Dame. PHOTO AFP

KUWAIT CITY: Kuwaiti authorities have banned a book by Russian literary giant Fyodor Dostoyevsky, one of nearly 1,000 titles blacklisted at a festival which opened on Wednesday in the Gulf state.

Saad al-Anzi, who heads the Kuwait International Literary Festival, told AFP the information ministry had banned 948 books including Dostoyevsky’s The Brothers Karamazov, a novel set in 19th century Russia that explores morality, free will and the existence of God.

Dostoyevsky joins a growing list of writers banned in the relatively moderate Gulf state, where a conservative trend in politics and society is rising.

More than 4,000 books have been blacklisted by Kuwait’s information ministry over the past five years, including Victor Hugo’s “The Hunchback of Notre-Dame” and “One Hundred Years of Solitude” by Colombian author Gabriel Garcia Marquez —Gabo to his fans.

All titles on show at the 43rd edition of Kuwait’s book fair, which runs through November 24, were screened in advance by a censorship committee as per Kuwaiti regulations.

The committee works under a 2006 law on “press and publications”, which outlines a string of punishable offences for publishers of both literature and journalism.

Activists took to the streets of the capital twice in September to protest against rising censorship.

Through the 1970s and 1980s, Kuwait was a regional publishing hub, home to the high-brow, pan-Arab cultural journal “Al-Arabi” and a string of popular scientific and literary books.

But in recent years, religious conservatives and tribal leaders have gained ground in parliament, parallelled by changing societal trends. Kuwait is the only Gulf state with elected lawmakers.