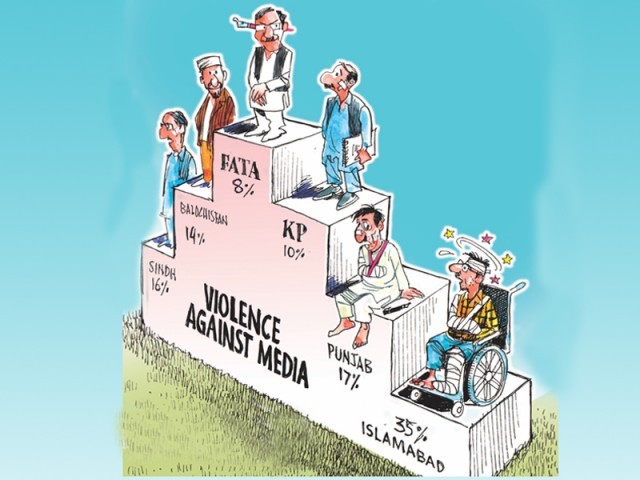 KARACHI: A free and pluralist media is vital to the democratic functioning of a country. However, media actors in Pakistan continue to face challenges including physical assault, threats, illegal detention, arrest and at times murder. At least 157 such cases were recorded across the country in last one year, according to a report by Freedom Network.

The violations included killing of five journalists for their work, 11 cases of attempted kidnapping or abduction, 39 illegal detention and arrest, 58 physical assault and vandalism, and 23 occurrences of verbal and written threats.

Homes and families of five journalists were attacked whereas 16 other instances involved officially endorsed censorship and legal proceedings against media men.

Islamabad, according to the report’s findings, emerged as “the riskiest and most dangerous place to practice journalism in the country with 35% or 55 of the total violations recorded in the federal capital”.

Punjab was the second worst offender with 17% of the violations, followed by Sindh 16%, Balochistan 14%, Khyber-Pakhtunkhwa 10% and 8% of the total recorded cases in Federally Administered Tribal Agencies.

The groups which threatened journalists, according to the report, include state and non-state actors, and political and religious parties, among others.

The most targeted medium remained television with 85 cases recorded against journalists associated with it compared to print, radio and online.

This graph illustrates how state and other non-actors targeted #journalists in #Pakistan during last one year#WorldPressFreedomDay #PressFreedom pic.twitter.com/ALQWcmDnjN

Two Pakistanis among 262 journalists jailed for their work worldwide

Anchor Hamid Mir, who was attacked in 2014, said unannounced censorship is increasing in the country. “We are facing pressure from within…and are forced to do recorded shows,” he told this newspaper in a WhatsApp message.

The senior journalist called upon media owners and journalist bodies to formulate a joint strategy to ensure freedoms guaranteed in the Constitution.

Azaz Syed, an Islamabad-based journalist who survived an abduction attempt last year, urged media practitioners to talk about censorship on social media and with like-minded individuals. “The ultimate stakeholders are the people…we must inform them what is going on,” he said.

Khattak said press freedom in the country has worsened despite improvement in overall security situation. “Threat actors have merely changed hands,” he added.

Full report can be viewed here.