The news anchor, has a male image with a voice, facial expres­sions, and action­s of a real person­
By Reuters
Published: November 9, 2018
Tweet Email 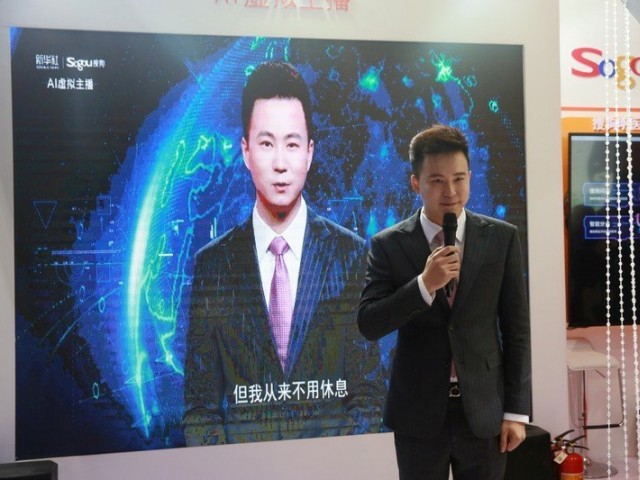 Xinhua news anchor Qiu Hao stands next to an AI virtual news anchor based on him, at a Sogou booth during an expo at the fifth World Internet Conference (WIC) in Wuzhen. PHOTO REUTERS

WUZHEN, CHINA: Chinese news readers may have some new competition – artificially intelligent robot anchors that can mimic human facial expressions and mannerisms while reading out reports.

The AI anchor, developed by state news agency Xinhua and tech firm Sogou Inc, was on display at the World Internet Conference in the eastern Chinese town of Wuzhen, drawing in curious passers-by.

The anchor, modelled on real-life Chinese news reader Qiu Hao and sporting a black suit and red tie, is part of a major push by China to advance its prowess in AI technology, from surveillance equipment to self-driving cars.

In another video presentation from Xinhua, a different robot presenter said it was his “very first day” at the news agency and promised to “work tirelessly to keep you informed as texts will be typed into my system uninterrupted”.

At the internet summit, Sogou marketing staff said it wasn’t clear when the technology would actually go into use, but crowds gathered nonetheless to take selfies with the digital anchor and Qiu himself who was at the event.

The conference is China’s top tech event of the year, and has in the past attracted names like Apple Inc, CEO Tim Cook and Alphabet Inc head Sundar Pichai.

AI to seep further into everyday life at Berlin’s IFA

This year’s iteration, however, which opened on Wednesday, was more muted and has a less glitzy global line-up, even as battle lines for control of the web have hardened amid a biting trade war between China and the United States.

Foreign websites such as Alphabet’s Google and Facebook Inc are blocked in China, where authorities also tightly control online content and censor or punish those who post material seen as opposed to “core socialist values”.