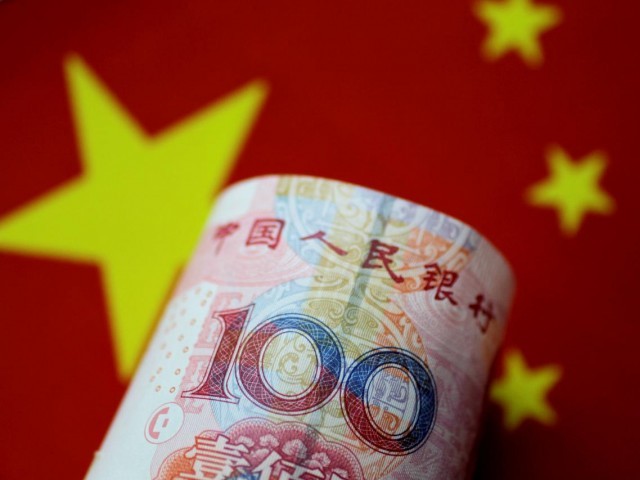 A China yuan note is seen in this illustration Reuters photo.

ISLAMABAD: Pakistan and China on Sunday agreed to trade in their local currencies in an effort to reduce dependence on the US dollar.

The currency swap arrangement (CSA) between State Bank of Pakistan (SBP) and People’s Bank of China (PBOC) had already been extended for a period of 3 years in respective local currencies.

A currency swap, also known as a cross-currency swap, is an off-balance sheet transaction in which two parties exchange principal and interest in different currencies.

The joint statement issued by the Prime Minister Office Media Wing said that the two countries expressed satisfaction at the operationalisation of the currency-swap agreement and reaffirmed the need to further strengthen cooperative ties of financial and banking sectors between the two countries.

Pakistan and China reaffirmed their complete consensus on the future trajectory of the China-Pakistan Economic Corridor (CPEC), timely completion of its on-going projects.

The two countries also renewed the pledge towards making joint efforts for the realisation of its full potential, with a focus on socioeconomic development, job creation and livelihoods as well as accelerating cooperation in industrial development, industrial parks and agriculture.

Both the sides reviewed the early harvest phase of CPEC and expressed satisfaction that rapid progress has been made in all areas, especially in the energy sector.

During the visit, the two sides also signed 15 Agreements/MoUs on a range of bilateral issues.

The two sides agreed on strengthening China-Pakistan all-weather strategic cooperative partnership, building closer China-Pakistan community of shared future in the new era in line with the principles set forth by the Treaty of Friendship, Cooperation and Good-neighbourly Relations between the People’s Republic of China and the Islamic Republic of Pakistan signed in 2005, a joint statement issued by the Prime Minister Office Media Wing said.

The two sides reiterated that BRI represents a win-win model of international cooperation and provides new opportunities for economic rejuvenation and prosperity of all countries.

Both sides agreed to task the CPEC Joint Cooperation Committee (JCC) to explore new areas of cooperation. In this regard, it was decided that the eighth session of the JCC will be held in Beijing before the end of the year.

To further expand cooperation under CPEC, the two sides announced setting up of a working group on socioeconomic development, to assist with livelihood projects in Pakistan.

Both Pakistan and China reaffirmed their commitment to CPEC and agreed that it was a win-win enterprise for entire region and would bring regional prosperity and development through enhanced connectivity.

They agreed to discuss the CPEC-related issues including through China-Pakistan Strategic Dialogue, political consultations and JCC.

Recognising the significance of Gwadar as an important node in cross-regional connectivity and the central pillar of CPEC, both the sides agreed to speed up progress on the port and its auxiliary projects.

Both sides dismissed the growing negative propaganda against CPEC and expressed determination to safeguard the CPEC projects from all threats.

Reviewing with satisfaction the historical development of China-Pakistan relations and the great strides made, both sides reiterated that the friendship between Pakistan and China has withstood the test of time, notwithstanding the changes in domestic, regional and international environments.

Both sides will continue to view China-Pakistan relations from a strategic and long-term perspective.

The Chinese side reiterated that China’s relationship with Pakistan is always a matter of highest priority in its foreign policy. China appreciated the consistent and strong support by Pakistan to China’s issues of core interest, and reaffirmed its support and solidarity with Pakistan in safeguarding its sovereignty, independence, territorial integrity and security.

It appreciated Pakistan’s important role in promoting regional peace, stability and security and efforts for the peaceful resolution of all outstanding issues with its neighbours.

The Pakistani side stressed that Pakistan-China relationship is the cornerstone of its foreign policy, and friendship with China represents national consensus and the common desire of all Pakistani people.

Pakistan appreciated the strong support and assistance provided by the government and people of China to Pakistan in its economic development. It unequivocally upholds the one-China policy and supports all efforts made by the Chinese government to realize national reunification.

According to the joint statement, both sides agreed to maintain frequent exchange of visits and meetings at the leadership level and continue to hold bilateral meetings between their leaders on the sidelines of major multilateral conferences and events.

The two sides agreed to further strengthen links between their legislative bodies. China welcomed the establishment of China-Pakistan Friendship Groups in Pakistani Parliament.

The two sides noted the growing volume of bilateral trade and agreed to take concrete measures to address trade imbalance. Those would include exchange of trade missions, broadening market access for agricultural and ICT products, and simplifying customs, quarantine and phytosanitary procedures.

In this context, the two sides agreed to conclude the second phase of the China-Pakistan Free Trade Agreement as early as possible, and continue discussions on the Pakistan-China Agreement on Trade in Services.

The two sides agreed to strengthen economic cooperation by fully leveraging the existing cooperative arrangements such as the China-Pakistan Business Council, which is composed of China Council for the Promotion of International Trade (CCPIT) and the Federation of Pakistan Chamber of Commerce and Industry (FPCCI), and those between Industry and Stock Exchanges of the two countries.

The two sides agreed to hold the next round of the Joint Economic Commission early next year.

The two sides attached importance to friendly cooperation between the People’s Bank of China and the State Bank of Pakistan (SBP).

They expressed satisfaction at the operationalisation of the currency-swap agreement and reaffirmed the need to further strengthen cooperative ties of financial and banking sectors between the two countries.

Both sides noted with satisfaction that Chinese and Pakistani banks have operations in both countries. Both sides agreed to strengthen cooperation on tourism promotion.

Both sides agreed to further enhance defence cooperation, maintain high-level visits and exchanges at various levels between relevant departments of the two armed forces, make full use of the China-Pakistan Defence and Security Consultation mechanism, deepen cooperation in areas such as military exercises, training cooperation, personnel exchanges, and equipment and technology cooperation.

Both sides agreed to further enhance cooperation against “Three Evils” of extremism, terrorism and separatism. Both sides will continue to regularly utilise their existing mechanisms of Strategic Dialogue and Counter-terrorism and Security Consultations to further promote communication and cooperation in relevant fields.

The Chinese side conveyed its support to Pakistan’s commitment and efforts to counter terrorism, assured Pakistan of its support in implementing its counter-terrorism strategy, and commended the tremendous sacrifices made by the Pakistani nation in fight against terrorism and for Pakistan’s immense contribution to regional and international peace and security through its achievements and successes.

The Chinese side recognised Pakistan’s efforts in actively strengthening financial regulations to combat terrorism financing, and called on all relevant parties to view Pakistan’s counter-terrorism efforts in an objective and fair manner.

The Pakistani side reaffirmed its support to the Chinese side in safeguarding its sovereignty and security, and combating separatism, terrorism and extremism including East Turkistan Islamic Movement (ETIM).

Both sides agreed to further expand and deepen their collaboration including in the areas of new and emerging technologies, nanotechnology, biotechnology, ICT, which can contribute to improved living standards through their applications in the fields of health, agriculture, water, energy and food security.

The two sides agreed to strengthen cooperation in the field of manned space, and the China Manned Space Engineering Office (CMSEO) and SUPARCO will sign a framework agreement on cooperation.

Both sides reaffirmed their commitment to the purposes and principles of the UN Charter, promoting international peace and security, and safeguarding the contemporary world order and the UN-centric international system.

China appreciates Pakistan’s quest for peace through dialogue, cooperation and negotiation, on the basis of mutual respect and equality, and supports Pakistan’s efforts for improvement of Pakistan-India relations and for settlement of outstanding disputes between the two countries. Pakistan supported active participation of China at the platform of the South Asian Association for Regional Cooperation (SAARC).    Both sides agreed to strengthen cooperation on the Afghan issue and support the ‘Afghan-owned and Afghan-led’ peace and reconciliation process.

China appreciates that Pakistan and Afghanistan are coordinating closely through the Afghanistan-Pakistan Action Plan for Peace and Solidarity (APAPPS) to enhance cooperation between the two countries in all areas.

The two sides reaffirmed their commitment to multilateral, non-discriminatory arms control and non-proliferation endeavours. They noted with concern the continued pursuit of double standards in the application of non-proliferation norms and procedures and called for policies upholding rule of law and long-standing rules. China appreciates and supports steps taken by Pakistan for strengthening the global non-proliferation regime. In this context, China supports Pakistan’s engagement with the Nuclear Suppliers Group and welcomes its adherence of NSG Guidelines.

Recalling the commitments of all states for implementation of General Assembly and Security Council resolutions relating to international terrorism, both sides underscored the need for all States to avoid politicization of the UN Sanctions regime and the work of the Financial Action Task Force (FATF). Both sides also reiterated the need to evolve the text of Comprehensive Convention on International Terrorism on the basis of consensus.

Both sides agreed to strengthen coordination and cooperation on international and regional issues of common interest; and maintain close communication and coordination within international and regional organizations and mechanisms such as the United Nations, the Shanghai Cooperation Organization (SCO), SAARC, the Asia-Europe Meeting (ASEM), the ASEAN Regional Forum (ARF) and the Conference on Interaction and Confidence Building Measures in Asia (CICA). China welcomed Pakistan’s membership of SCO and appreciated its active participation in the SCO Summit in Qingdao in June 2018.