Rallies staged across Sindh to condemn India’s atrocities in Kashmir

Rallies staged across Sindh to condemn India’s atrocities in Kashmir 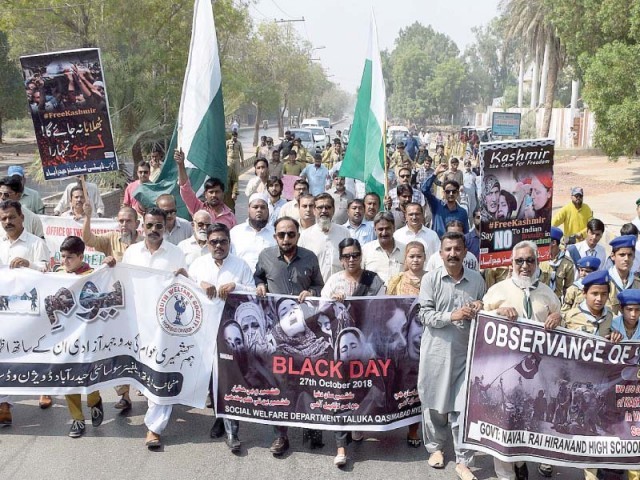 HYDERABAD: People across Sindh took to the streets to express solidarity with the people of Indian-occupied Kashmir and condemn the atrocities of the Indian government on innocent people. The rallies were taken out in many districts of Hyderabad, Mirpurkhas, Nawabshah, Larkana and Sukkur divisions.

The participants carried placards decrying Indian barbarity to stifle the voices of freedom and expressing support for political struggle of the Kashmiris.

“The Indian government has unleashed terror and is killing the people to intimidate them to give up their struggle,” said Babbur. However, he added, the scores of killings and other horrendous means employed to suppress the people’s demand for freedom have failed to yield India’s desired results because of the courage and bravery of Kashmiris.

Assistant Commissioner Sara Javed said that the purpose of observing black day is to expose the hidden face of India before the world. The officials of several government departments, teachers, students and people from different walks of life participated in the rally. Government Schools Teachers Association (GSTA) and Pakistan Muslim League-Nawaz’s local leaders and workers also took out separate rallies in Hyderabad.

In Larkana, ADC Ayub Chachar led a rally. “India is for decades violating the resolution of the United Nations which called for a plebiscite in the occupied valley,” said Chachar. He said the global community’s silence is encouraging India to opt violent means to subjugate Kashmiris’ political struggle.

District Education Officer Akhtar Korejo, speaking at a rally in Larkana, deplored that the human rights violation by the Indian government and its army had become a routine in the occupied Kashmir. “But the international human rights group have been ignoring the large scale violations in Kashmir,” he said.