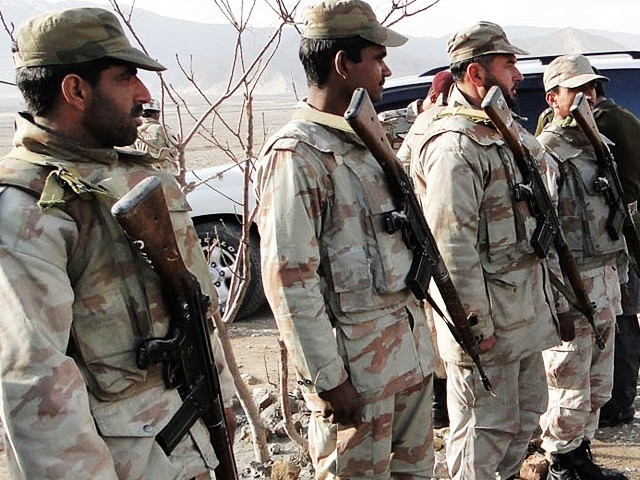 Newly-appointed IG FC Balochistan Maj Gen Nagra was heading towards Khuzdar from Panjgur to review the situation in the area when his convoy was ambushed in Naal, some 10 kilometres from Washuk.

Seven, including Levies personnel, killed during two days of Eid in Balochistan

Heavy contingent of law enforcement agencies rushed to the spot and cordoned off the entire area within minutes of the attack while a search operation is under way to hunt down the attackers.

The IG FC and commandant Panjgur Rifle were evacuated to District Headquarter Baseema and later shifted to Khuzdar via a helicopter.
The martyred FC soldiers were identified as Hawaldar Yahyauddin and Lance Naik Saifur Rehman. The bodies were shifted to DHQ Hospital and later transported to their native towns for burial.

So far, no group has claimed responsibility for the attack, but the defunct Baloch Liberation Front (BLF) led by Dr Allah Nazar Baloch has remained active in attacking security forces in the Makran division, particularly in Awaran and Washuk districts.

In September last year, three security personnel, including Lt Col Amir Waheed, had been martyred in an attack in the bordering areas of Washuk and Panjgur by the Baloch separatist fighters.