People living in the tail-end areas of Sindh unhapp­y with the constr­uction of dams
By Our Correspondent
Published: October 26, 2018
Tweet Email 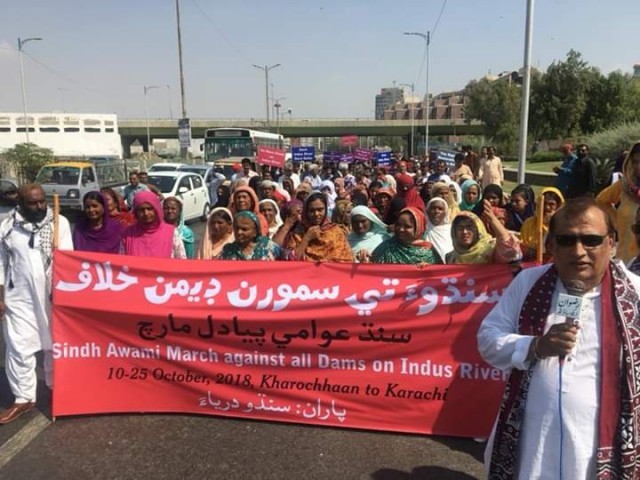 KARACHI: After travelling on foot for the last 15 days, participants of the long march comprising fishermen protesting the construction of dams, gathered in front of the Governor’s House in Karachi on Thursday.

The participation of a large number of women and children in the march, which started from Thatta on October 10, was mean to give a message to the authorities that people living in the tail-end areas of Sindh were unhappy with the construction of dams.

“The river water was abundant and we were landlords of our area. Since 1960s, the water is being diverted to the canal and dams in the upstream,” she said, adding that they have been protesting against cuts on river Indus for the last 10 years, but no one had heeded them.

Fisherfolk Forum (PFF) was joined by people from different walks of life. Political leaders, civil society activists, writers, poets and a large number of fishermen were among the participants.