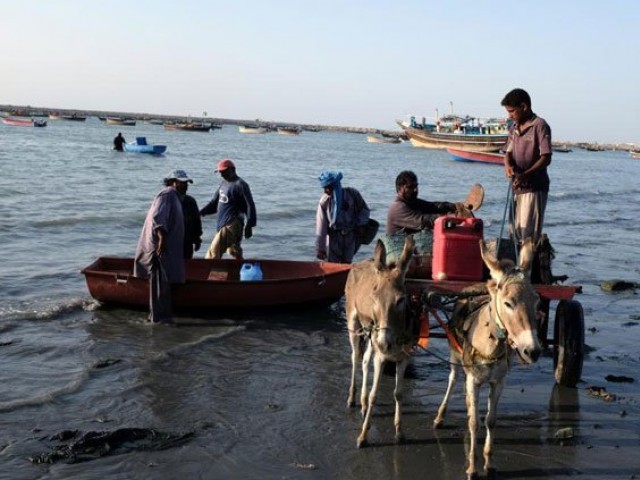 Fishermen take out their catch from the sea at the end of the day in Gwadar, Pakistan October 4, 2017. PHOTO: REUTERS

QUETTA: Balochistan Chief Minister Jam Kamal Khan has said development of Gwadar will be pointless if relief is not provided to locals.

He said this while chairing a meeting with a delegation of fishermen belonging to the port city on Saturday. He pledged that their problems would be resolved.

The CM said the rights of the people would be protected at all costs. He added that the government had been taking steps to address fishermen’s problems.

“We have been working to boost the province’s fisheries department,” he said.

The meeting also agreed to provide three routes to local fishermen in the Eastbay Expressway.

Meanwhile, the chief minister visited Jiwani and Panwan and met local residents and tribal elders. He assured the residents that incumbent government had been taking measures to provide electricity and clean drinking water to the locals.

Earlier, Jamaat-e-Islami (JI) provincial general secretary Hidayat-ur-Rehman Baloch urged the government to pay attention to the apprehensions of fishermen regarding the Gwadar Expressway or else his party would not accept the master plan agreed upon between Islamabad and China.

Referring to the China-Pakistan Economic Corridor (CPEC), he said fishermen were being ignored in the Gwadar projects, but the “JI is standing behind them”.

Baloch called it unfortunate that fishermen and other local people were not taken into confidence before the Gwadar projects were finalised. He alleged that the government wanted to enforce their agenda on the fishermen and locals at gun point.

He said CPEC was being created because of Gwadar, but the people of Balochistan were being deprived of its fruits. He warned that the JI would never accept any project launched without the consent of locals, and stage a protest if locals were deprived of CPEC benefits.

Before concluding his talk, Baloch urged the lawmakers of Gwadar to work for the interests of people instead of others.

On Friday, a large number of fishermen had staged a protest march, demanding protection to their businesses that is feared to take a hit after the construction of Gwadar East-Bay Expressway. Representatives of various NGOs and civil society activists also took part in the protest march.

The march started from Dhoria, a settlement of fishermen in Gwadar. The participants of the march carried placards and chanted slogans in favour of their demands. They said the authorities had not taken any step despite their reservations about the expressway.

The fishermen said they were not against the construction of the expressway but wanted the authorities to protect their interest and means of business.