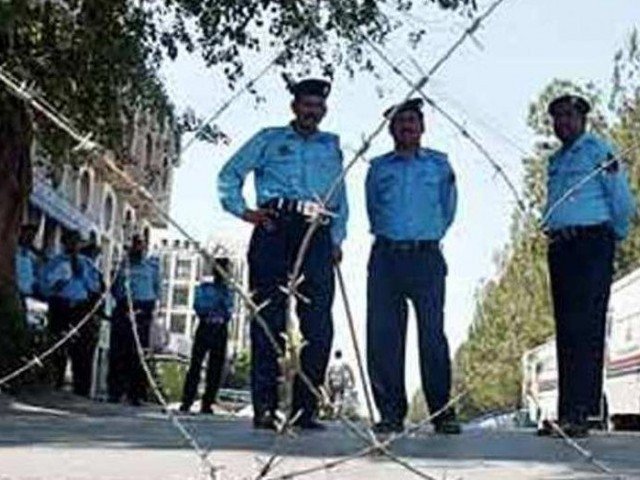 ISLAMABAD: Police on Monday detained the estranged husband of a policewoman who was allegedly sexually assaulted while returning home from her duty in the federal capital on Saturday night.

The man’s family, however, claims that he was picked up by the police Sunday morning and has been tortured since. Police say they have not been able to track down the real culprits thus far.

The victim, a police commando, was returning home when she was assaulted on Saturday night. The incident happened despite the fact that she was still in her uniform and had her official gun in her bag.

The officer told the police in her statement that she had taken a commercial passenger van to the Fazaia Stop on Expressway at around 9:45pm. She said that her father usually picks her up from the spot at that time.

However, on Saturday, when she found that her father was not waiting for her, she started to make her way towards her house in a settlement in the nearby Khanna Dak area. She was walking when a bulky man snuck up on her from behind her, grabbing her by her neck.

She said that the man beat her up, attempted to strangle her and then dragged her to the nearby bushes where he raped her and left her there in an unconscious state.

When she regained consciousness, she walked out of the jungle on her own. A passerby spotted her and helped her home.

The officer said that her assailant did not rob her since all her belongings and valuables, including her official gun, were intact in her bag which was found lying nearby.

Soon after, she reported the matter to the nearby Koral police station where a case of rape and terrorism was registered against the unidentified assailant.

The victim had married last year but had left her husband just two months later and had been living with her parents ever since.

The police reportedly picked up her estranged husband on Sunday morning and have been questioning him.

The man’s family approached Operations SSP Syed Ameen Bukhari on Monday claiming that the suspect was in the illegal custody of the police since he had been neither formally booked nor arrested.

“The police picked him up on Sunday morning and have badly tortured him overnight. He started bleeding from his mouth and nose due to the torture,” read an application submitted to SSP Bukhari by the man’s family.

SSP Bukhari said that they were working on some clues to track down the suspect.

He confirmed that the victim’s estranged husband had been questioned by the police since there had been a history of some kind of domestic dispute between the two.

However, the officer said neither the husband nor anyone else had been arrested in the case thus far.

“We have constituted two special teams, each being led by an SP to track down the accused,” SSP Bukhari said, as he expressed the hope that the culprit would be nabbed soon. Meanwhile, State Minister for Interior Shehryar Afridi on Monday visited the victim and her family at the Polyclinic hospital where the officer has been receiving treatment.

He enquired about her wellbeing and assured her of utilising all resources to catch the culprit.

“What happened is unacceptable. To protect people’s lives and property is the state’s responsibility and we will fulfil our responsibility,” the minister remarked, adding that the case is a test for his ministry and the capital police. He directed the authorities to leave no stone unturned in tracking down the culprit and bringing them to justice. He also directed the authorities to shift the victim to the Shifa International Hospital for better treatment.

“In Islamabad, we have to set standards which should be emulated by authorities across the country,” the minister said.