Servic­e likely to be launch­ed in Karach­i next month
By Nabil Tahir
Published: September 28, 2018
Tweet Email 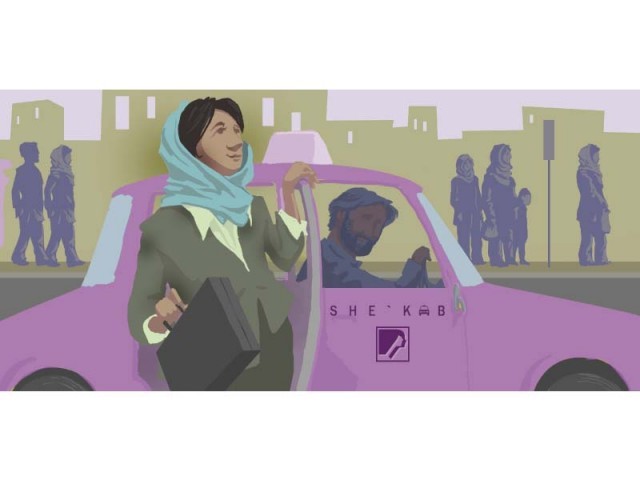 KARACHI: As more and more women enter the public and professional spheres across the country, the need for safe modes of transportation for women has become increasingly evident. Recognising this burgeoning demand, Hira Batool Rizvi, a young entrepreneur, has taken it upon herself to provide a safe mode of travel designed to facilitate female mobility. With the launch of She’Kab, Rizvi aims to not only provide a safe and reasonably priced transportation service for women but also create employment opportunities for a vast number of individuals.

She’Kab is a subscription-based ride-sharing platform that uses intelligent clustering to connect riders with drivers and fellow commuters through their platform.

Groups of riders from the same area can commute through a common cab and divide the fare between them on a monthly basis. Rizvi’s idea has been globally recognised through Shell Tameer Awards and Shell LiveWIRE Global Top Ten Innovator Awards.

Rizvi began thinking about innovative means of transport while she was a student, and noticed the lack of safe means of travel for women. Then as she came into professional life and learnt of carpooling technologies being used around the world, she came up with She’Kab.

“When I was a student, safe and reliable transportation was my biggest issue. The public transport infrastructure was neither safe nor economical for a student. It also had no provision for female seating, where a 14 seater vehicle would have only two seats reserved for women. At times, when women had to be adjusted in the back with men, they would face harassment,” she said.

An electrical engineer by profession, Rizvi was highly motivated to empower other women and address the issue of mobility and transport. This propelled her toward the world of entrepreneurship and she brought She’Kab to the masses. She started the service in her native town, Rawalpindi, expanded to Islamabad and is now set to launch She’Kab in Karachi.

Speaking of her student days, Rizvi says, “the local cabs were highly overpriced and not feasible for a student’s budget, whereas for working women it (transportation) would take a major chunk from their salaries. This is what propelled me to bring forth a solution”.

While pursuing her higher education in Science and Technology Policy at Georgia Tech, USA, Rizvi saw companies like Uber, Lyft, Airbnb which worked on shared economy models. Inspired by them, she came up with a similar idea and worked with the aim of service delivery – ‘A safe taxi service for women, by women.’

The realisation that working within the confines of the patriarchal social structure in Pakistan, where a solely female drivers’ business model would not survive, led her to change her business model to incorporate the existing cab network as a more viable and practical solution.

Like every other entrepreneur, Rizvi also faced problems to build up her startup, but her dedication and the recognition given by Shell Tameer allowed for success. There came a time when She’Kab lacked the funding to progress. It was then that Shell Tameer came to her aid.

In 2017, Hira applied for Shell Tameer Awards and made it to the final top 12 in the Technology Innovation category. Then She’Kab was further nominated through Shell Tameer, for the Shell LiveWIRE Global Top Ten Innovator Awards, and stood out as one of the three Runner-up Prize winners to bag approximately Rs1 million.

“This amount was the saviour, which rescued us from the crisis, and this award money was used as the 50pc of the total amount spent to develop the mobile applications. More drivers and riders started to register through the application and motivated other female drivers to register as a driver,” she said. Moreover, She’Kab drivers increased from 43 drivers to the current figure of 515 drivers. The currently registered riders have reached 4,500 and business is booming.

Kanwal, a female driver in Islamabad who was encouraged and empowered by She’Kab, now earns a decent living for herself. After the death of her parents, and as the eldest sibling it fell upon her to run her household and support her family. Since she came on board with She’Kab, Kanwal has been able to maintain a better standard of life than before.

“I started driving five years ago when there was no one to support my family after my father passed away. I faced a lot of adverse pressure from my relatives when I first started driving for She’Kab, however, I kept going. The continued support from She’Kab gave me the courage to keep driving for the service. Now I feel so good to be a source of helping other working and studying women,” said the burqa-clad female driver.

Having tested and automated her solution completely in the twin cities, Rizvi now wants to expand operations to Karachi where she thinks there is a higher number of female professionals and students who will benefit from the service. She will be registering private cars and vans for the service in Karachi and hopes to launch the service within a month.