Kamal vows not to let enemie­s of the state succee­d in their agenda­
By Mohammad Zafar
Published: September 19, 2018
Tweet Email 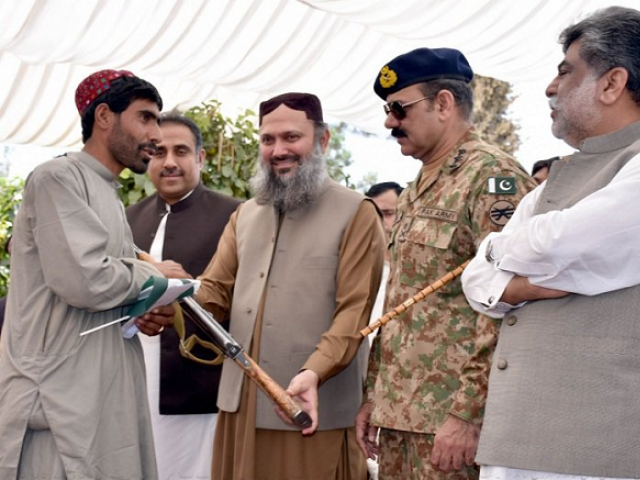 A Ferrari hands over his weapon to Chief Minister Jam Kamal Khan in the garden of the Balochistan Assembly. PHOTO: MOHAMMAD ZAFAR/EXPRESS

QUETTA: In his first message to the Ferraris after becoming chief minister of Balochistan, Jam Kamal Khan on Tuesday appealed to the remaining Baloch separatist fighters to shun their armed struggle against the state and join the mainstream for the sake of development of the province.

“Our enemies are trying to turn our youth against us by spreading fake propaganda against the state but their nefarious designs will be foiled as the new provincial government is committed to ending the longstanding sense of deprivation among the people of Balochistan,” the chief minister said while addressing a ceremony held to welcome the Ferraris, who skipped fighting with the state, in the garden of the Balochistan Assembly.

Lieutenant General Asim Saleem Bajwa.
The provincial government has distributed compensation cheques among the Baloch Ferraris, who came down from the mountains and joined mainstream.

“Our youth were being lured through false propaganda and money to wage war against the state, but they (enemies) can’t succeed in their vicious agenda of disturbing peace in Balochistan,” said Kamal.
On the provincial government’s future planning, Kamal said, “We have vowed to put Balochistan on the track of development.

On Prime Minister Imran Khan’s recent announcement of granting citizenship to refugees from Afghanistan and Bangladesh living in Pakistan, he said, “I don’t understand on what grounds the prime minister gave such a statement.

On Pakistan cricket team’s Asian Championship match against rival India, the chief minister said, “The whole nation is praying for our cricket team. They must perform their best against the Indian team.
“They have to pay full attention to their fielding as well as performing their best in bowling and batting.”