CM hits out at Brahum­dagh and Hyrbya­ir for using Baloch youth as ‘fuel’ for their paid terror campai­gn
By Mohammad Zafar
Published: December 9, 2017
Tweet Email 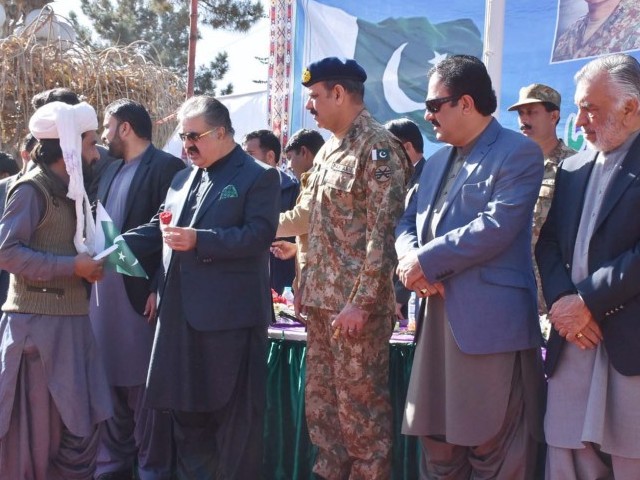 QUETTA: At least 70 Baloch separatist militants, including commanders, renounced violence and laid down their arms on Saturday at a ceremony Chief Minister Sanaullah Zehri and Commander Southern Command Lt Gen Asim Saleem Bajwa were among the participants.

The Ferraris belonging to Baloch separatist groups announced submitting to the writ of the state and becoming part of the national mainstream, according to an official press release.

Home Minister Sarfraz Bugti and other government officials also attended the ceremony. Around 242 Ferraris who had given up violence earlier were also invited to the ceremony held on the lawns of the provincial assembly in Quetta.

“We wholeheartedly welcome all our brothers who quit violence and accepted the writ of the state, because we only can get our rights by remaining part of Pakistan,” Zehri said in his speech at the ceremony.

“The time has come to reap the fruit of our 70-year-old struggle for our rights. After the 18th constitutional amendment, Balochistan has been enjoying full autonomy,” he added.

“The media should highlight these poor people who don’t have enough resources to feed their children, while the self-styled freedom fighters are living luxurious lives in Europe,” he added.

“Their children are studying in Oxford while they travel in luxury vehicles. They are using innocent Baloch youths as fuel by arming them,” Zehri said. “They are taking money from Pakistan’s enemies.”

About the possibility of Marri’s return to Pakistan, Zehri said the so-called nationalists were once planning to come to attack Pakistan on board Nato tanks, “but today they are returning by commercial flights with a commitment to join mainstream politics”.

He added, “We have warned them in the past that we are in Pakistani tanks and we will frustrate your nefarious ambitions against Pakistan.”

Applauding the surrender of Baloch militants, the chief minister said the “Pakistani people have big hearts so they would be ready to pardon all crimes you people have committed against them”.

“I am the father of three martyred sons. Still I’ll forgive your crimes, so come and lay down your arms,” Zehri said. “But those challenging the writ of the state will be dealt with, with an iron hand.”

One of the militant commanders, belonging to the Baloch Liberation Front and hailing from Kalat, called upon other militants to shun violence. “We are being lured with promises of money and other facilities but on the ground we were in appalling conditions.”

The military spokesperson added that the self-realisation by misled Baloch reflects the success of the relentless efforts of the the civil-military leadership.

Self realisation by misled Balochs reflects success of relentless efforts by Civ-Mil leadership towards #KhushHalBalochistan. (2of2). pic.twitter.com/Oaf7tSRm1w

PPP’s rental power projects could not generate one megawatt of electricity: PM Abbasi