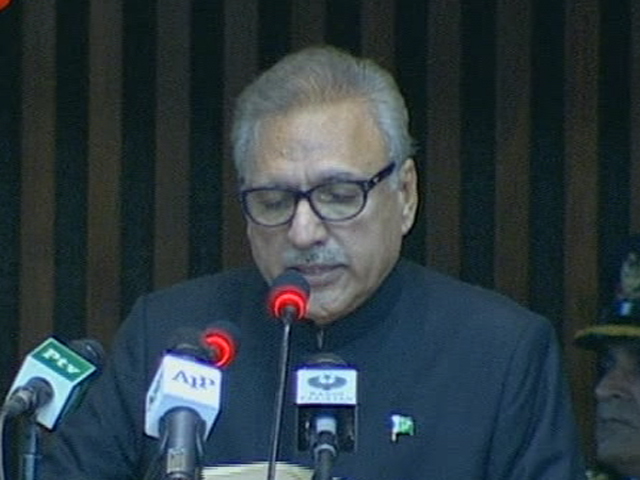 ISLAMABAD: President Arif Alvi broached upon a host of issues in his maiden speech to a joint sitting of parliamentarians at the National Assembly, including strengthening institutions and eradicating corruption, besides highlighting the need to capitalise on the country’s youth bulge to build a ‘Naya Pakistan’.

The session started on schedule but as soon as recitation from the Holy Quran and a Na’at finished, PML-N lawmakers rose from their seats in a bid to make some comment, but the move was disallowed by National Assembly Speaker Asad Qaiser, prompting them to stage a walkout in protest.

President Alvi, meanwhile, discussed wide-ranging issues on the day marking the start of the parliamentary year.

“The recently-concluded general election also proved that people want a corruption-free Pakistan. For curbing corruption, there is a need to strengthen accountability institutions, besides instituting a transparent system, enabling them to perform their duties honestly and without any discrimination,” he said.

Reiterating the resolve for building a ‘Naya Pakistan’, he said that this was only possible if the government promoted simplicity, discontinued unnecessary protocol and eliminated corruption.

“According to the established principles of economics and Pakistani law, the debt-to-GDP ratio should not exceed 60 per cent,” he said, adding that laws in this regard had been persistently violated in the past.

“External and internal debts have surged beyond critical levels and [correcting] this requires immediate attention,” he said.

Shedding light on the country’s foreign policy, the President said it must revolve around the principle of maintaining good relations with all nations, especially the neighbouring countries.

“Bilateral relations have improved with the recent visits to Pakistan of the foreign ministers of China, United States, Iran and Turkey and Saudi Arabia’s information minister. [Pakistan’s] foreign minister’s visit to Afghanistan also helped in this regard,” he said.

He said it was the government’s priority to build good relations with all countries in general and Muslim countries in particular.

Alvi said the friendship with China was exemplary and based on mutual trust. “It has stood all the tests of time … both countries have stood beside each other through thick and thin,” he said.

Reiterating government support to the China-Pakistan Economic Corridor (CPEC) projects, he said it was boosting economic activity in the region. “I hope the government will complete CPEC projects expeditiously,” he said.

Expressing the hope that energy and trade relations with Central Asian states would also be strengthened, he said it would help the country achieve its economic growth targets.

The president said Pakistan accorded utmost importance to the country’s relations with Russia too.

“I am confident that bilateral cooperation in the fields of economy, defence and culture will be further enhanced,” he added.

He said Pakistan enjoyed a special relationship with Turkey, and close relations between the two countries were an important factor in the stability and progress of the entire region.

“We shall continue our endeavors in this regard with sincerity,” he said.

Alvi said, “We want peaceful and good neighbourly relations with India based on mutual coexistence. We shall welcome all positive steps in this direction.”

However, he insisted that for an enduring relationship between Pakistan and India, resolving the Kashmir dispute was crucial. “Blame-game is no solution to any dispute,” he commented.

Maintaining that the government would continue to provide moral, political and diplomatic support to Kashmiris, he said, “Pakistan will endeavor at all levels to resolve this dispute in accordance with the United Nations Security Council resolutions. The people of Kashmir have rendered historic sacrifices in their quest for their right to self-determination.”

Denying the Kashmiris their right to self-determination was condemnable, he remarked.

Referring to a recent report compiled by the Office of the UN High Commissioner for Human Rights, he said it clearly highlighted gross human rights violations suffered by the Kashmiri people.

He stressed the need for bringing to an end the grave human rights violations in Indian-occupied Kashmir, and exhorted the international community to play its role in the context.

The President said that the country’s economy had been badly affected by corruption.

Industrial sector, he said, was dysfunctional, unemployment was high and the country was burdened by huge debts.

“It is disturbing to note that we are spending a major share of our resources on repayment of national debt. The balance of trade is also unfavourable,” he said, adding that over the past few years, the circular debt had surged to Rs1,100 billion and the rupee had depreciated sharply in recent months.

“Domestic terrorism and extremism have been overcome through the resilience of our nation… and sacrifices of our law-enforcement agencies,” he said.

Crediting the armed forces for restoring peace in the country, Alvi said that they had successfully carried out operations, countering terrorism not only in the country but in the world too.

“The world can learn from us and on behalf of the entire nation, I would like to pay tribute to all martyrs in this struggle. They have put in the greatest sacrifices for their motherland,” he said.

About domestic challenges, the president said that Pakistan was facing a severe water crisis.

“Due to scarcity and reckless use of water, underground resources have also depleted to a dangerous level,” he said.

Several areas in Balochistan and Sindh were facing drought-like situation, he said, adding that the country was also being affected by climate change.

Global warming was causing temperatures to rise and glaciers were melting rapidly, he said, adding that the government had assigned top priority to the construction of new water reservoirs.

“I earnestly believe that both resident and overseas Pakistanis will respond positively to [the dam] donation drive of the chief justice and the prime minister,” he said and urged the nation to stop wasting water..

The president also called for focusing on energy-related issues.

He said the country’s power transmission system needed to be made more efficient by reducing line losses eliminating electricity theft.

He urged the relevant ministries and departments to promote run-of-the-river projects in Northern Areas.

Stressing the need for adopting an effective and comprehensive strategy for providing adequate agricultural inputs, he said farmers should get proper pesticides, fertilisers and other agricultural equipment to boost farm production.

He said enhancing the number of educational institutions and improving the quality of education was a must.

Urging parliamentarians and the media to promote public awareness about mother-child health, he said that small family units were beneficial. He called for women development policies and said it was also necessary to provide employment opportunities for all segments of society.

The president said that youth comprised 60 per cent of the country’s population and the government needed to create employment opportunities based on merit, qualification and capacity, enabling them to earn their livelihoods.

“They need to be equipped with vocational training too so that they can find suitable jobs,” he said.

The president also urged the government to invest in human capital, saying that it was only possible through a uniform curriculum and educational system.

After merger of tribal areas into Khyber-Pakhtunkhwa, he said, the government needed to devise relevant policies and take prompt decisions in line with the hopes and expectations of the people living in this region.

“Pakistan will keep on playing its role with grace and responsibility among the nations of the world,” he said.