Says "we have to try harder" to curb VIP cultur­e and protoc­ol
By Hafeez Tunio
Published: September 15, 2018
Tweet Email 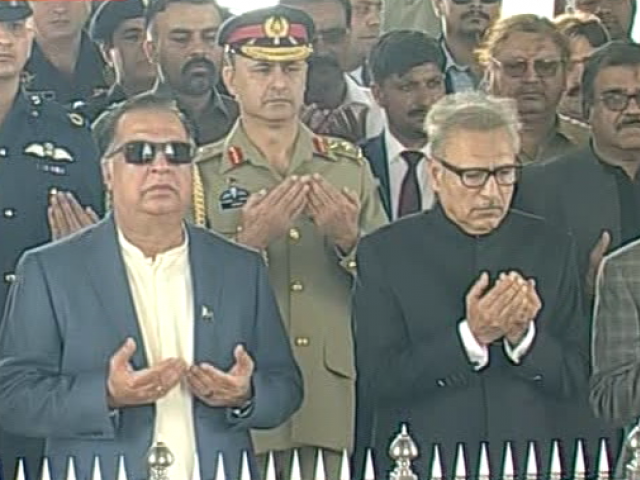 KARACHI    : Despite the top court orders and the Pakistan Tehreek-e-Insaf (PTI) government’s claims of having discarded elitist culture, Karachi on Friday night witnessed a heavy traffic jam due to security protocol of Dr Arif Alvi who paid his maiden visit to Sindh capital after being elected as the country’s 13th president.

Dr Alvi arrived in the city from Islamabad on a regular flight of Serene Air like a common passenger but outside the airport he was provided a convoy of more than 30 vehicles. The security protocol not only blocked the main city arteries connecting Sharea Faisal, but also left many commuters frustrated and protesting.

Not only that of the president, but the protocol of the Sindh governor, chief minister, IG police and chief secretary who went to receive the president also multiplied the problem and the impact of clogging was felt as far as the city’s Abdullah Haroon, Zaibunnisa Street and MA Jinnah Road.

We should look into this too and not become a nuisance for my own neighbourhood where I have lived all my life. I do not begrudge security but when it becomes painful for the common man we should draw a line somewhere. https://t.co/iOi2X9yABO

After much criticism on the TV and social media, Dr Alvi who is very active on Twitter said in a message that he was ‘embarrassed’ by the protocol provided for him at the airport despite his request otherwise. He, however, said the protocol was not only for him but also for other dignitaries who received him.

“The long chain of official cars following me is despite the fact that I asked all officials present at the airport not to embarrass me with a huge protocol. One or two cars in front and one or two cars behind may satisfy their security needs. This did not happen. We have to try harder,” he tweeted.

Addressing the president, a Twitter user, Adnan Anees, said, “What about police mobiles outside your house 24/7. The same police mobiles shut down many restaurants and chai cafes last night.”

That is true too, so we must manage this better. https://t.co/CwUlz934Og

The president replied to the comment, “We should look into this too and not become a nuisance for my own neighbourhood where I have lived all my life. I do not begrudge security but when it becomes painful for the common man we should draw a line somewhere.”

The people from various talks of life criticised Dr Alvi on social media referring to the PTI’s claims to bring drastic change in New Pakistan.

Speaking to The Express Tribune, a senior official in the protocol department said they would not reduce the security until and unless the president’s protocol requested for it.

Briefing about the system, he said, “Before arriving in Karachi, the protocol of the president or the PM in Islamabad communicate us and we are entitled to give security laid down in the blue book, a classified document for the security of VVIPs.”

He said the number of the security vehicles depends on the movement of prime minister, president, chief justice of Pakistan and other dignitaries.