PTI, PPP and MMA contes­ted for the covete­d positi­on
By Our Correspondents
Published: September 4, 2018
Tweet Email 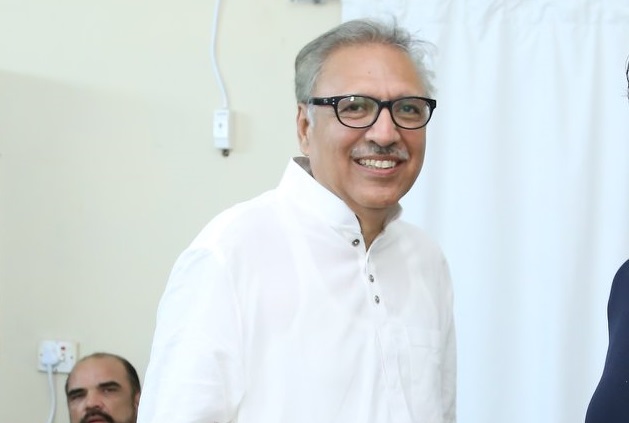 ISLAMABAD / QUETTA / PESHAWAR: Pakistan Tehreek-e-Insaf’s (PTI) Dr Arif Alvi was elected as the 13th president of Pakistan as the country’s electoral college – comprising of the Senate, national and provincial assemblies – cast their votes on Tuesday.

Voting via a secret ballot commenced simultaneously in all assemblies and the Senate at 10am, and concluded around 4pm. Chief Justice of Peshawar High Court Justice Waqar Ahmed Seth began counting the votes, each vote is being scrutinised to ensure has put marks on the vote.

The Election Commission of Pakistan (ECP) released a statement  announcing Alvi’s win after bagging a lion’s share of votes with 353, followed by Fazl with 185 with Ahsan coming in last with 124 votes. 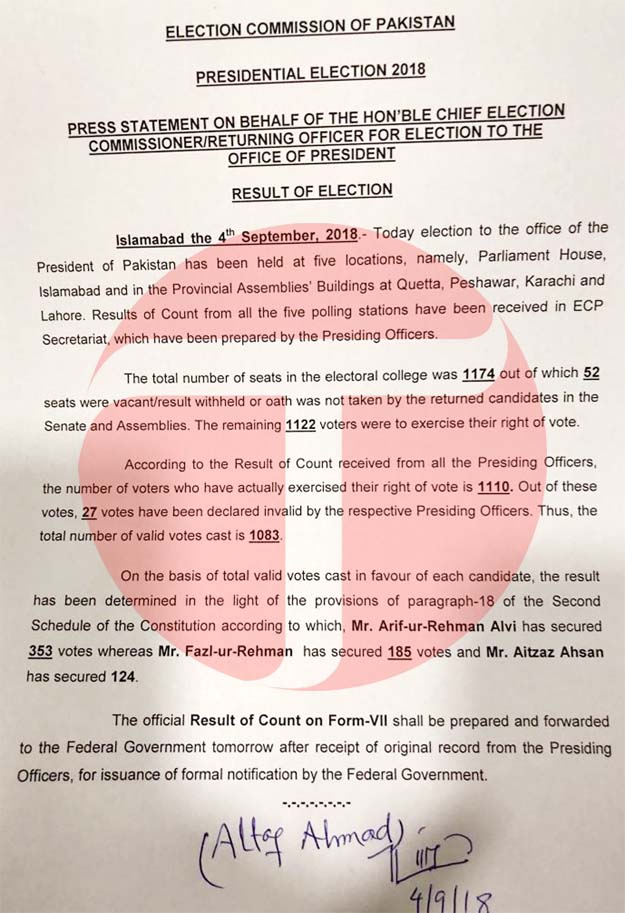 President-elect Alvi spoke to the media following the preliminary results and thanked PM Imran Khan for considering him for the position. “I pray I get the chance to serve this post in its true spirit. Our government has a message of serving the masses. I am not the president of PTI alone, I am the president of all parties and all Pakistanis.”

Alvi further added that everyone will be invited for the oath-taking scheduled on September 9, including the opposition. “My political struggle dates back to 1967, since the time of Ayub Khan. However, I believe that this nation has gained much awareness since. The president also promises whatever is promised in the Constitution.”

Prime Minister Imran Khan cast his vote as polling entered its last stretch, and left the Parliament shortly after doing so.

Members of the NA and Senate began the polling early and Speaker NA Asad Qaiser was the first to cast his vote in the Lower House. The parliamentarians cast their votes through secret ballots and in alphabetical order. 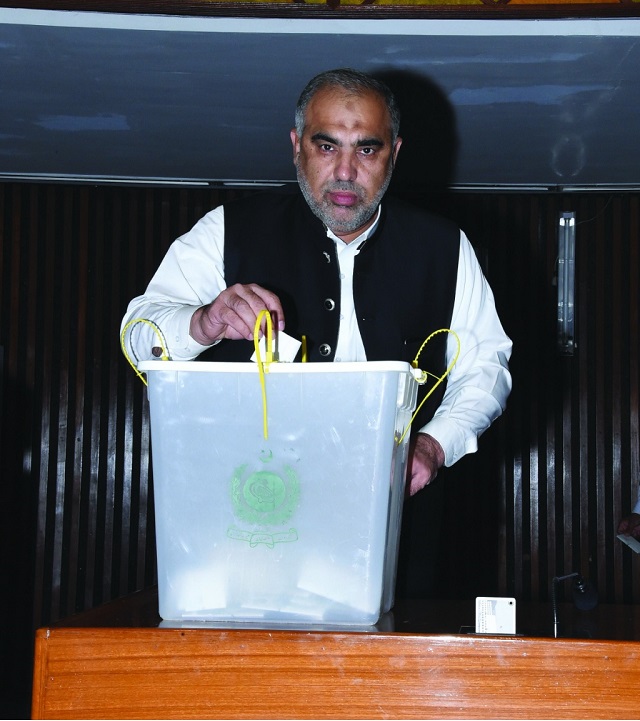 Members of the Khyber Pakhtunkhwa Assembly commenced the polling process at 10am. The polling station was established inside the K-P assembly hall and the CJ PHC was the presiding officer for the elections.

K-P Assembly had a total 124 members, presently, 112 members were part of the electoral college. A total of 12 seats are empty. 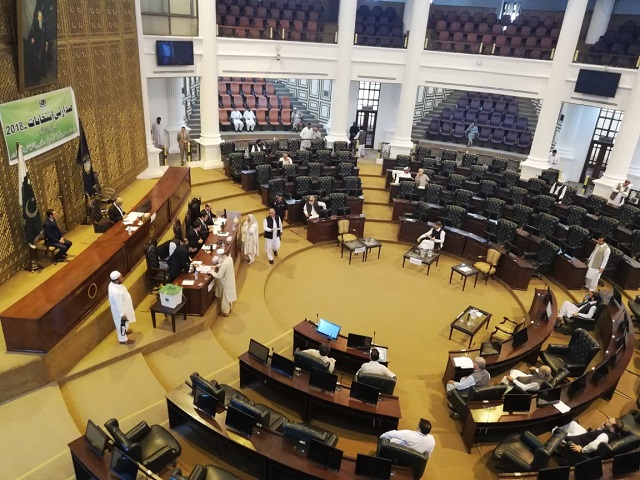 PTI and allies had 79 members in the house while the joint opposition including Awami National Party (ANP), Pakistan Muslim League-Nawaz and (PML-N), MMA and the PPP had a total 33 votes.

Heavy contingents of security forces have been deployed around the assembly to provide security during the polling process.

Lawmakers of the Punjab assembly are also casting votes for the election. Chief Minister Usman Buzdar is also present in the session. Minister Local Governments Abdul Aleem Khan was among the first to cast their votes.

Speaker Punjab Assembly Chaudhry Pervaiz Elahi said, “The way Shehbaz destroyed the province is incomparable, look at the condition of the schools and hospitals yourself. Our candidate is Alvi and we are praying for him. Our alliance is blessed. I won’t comment on the bureaucracy because it’s not my job, but I have stated that we will work hard for the promises we made.”

Health Minister of Balochistan said, “We have a majority in Balochistan. We see a positive way forward here.” BNP’s Bushra Rind also looked positive after voting and confidently told the media that she voted for PTI’s Alvi.

Three Tehreek-e-Labbaik members attended the session but abstained from voting.

Opposition parties failed to reach a consensus earlier and pitch a joint candidate. The parties blamed each other for the division, which will benefit PTI’s Alvi.

Division in opposition ranks over fielding of a joint candidate started when the PPP unilaterally nominated Aitzaz and sought the support of other opposition groups. The PML-N, the second largest party in Parliament and largest among opposition groups, declined to support the PPP nominee.

“I have no idea whether we have the vote or not. However, PTI’s victory will be Zardari’s doing, and he deserves the medal for it. We had planned with the PPP to bring up a strong opposition. However, Asif Ali Zardar ruined the opposition’s strength. We could have made history if we had unveiled the reality behind the rigged polls,” PML-N’s Khawaja Saad Rafique said on Tuesday.

“He unilaterally suggested the name of Aitzaz Ehsan without taking rest of the opposition into confidence. It appears Alvi’s victory is evident, and PPP deserves the credit for it. The PPP is a big political party, I cannot comment on it much. Zardari has his own problems, and his attitude is serving as assistance for Imran Khan.”

Several direct and indirect contacts and a multiparty huddle failed to bridge the differences between the opposition groups.

The incumbent President Mamnoon Hussain took oath on September 9, 2013, and his five-year term is set to expire on September 8. According to Clause 4 of Article 41 of the Constitution, which deals with matters related to presidential election, “Election to the office of president shall be held not earlier than 60 days and not later than 30 days before the expiration of term of the president in office.”

This means the election for new president was due by August 8. However, the Constitution explains that in case the assemblies are not functioning, the presidential poll will be held within 30 days after the general election which was held this year on July 25.

Going by the constitutional provision, the presidential poll was due on August 23. However, this deadline also could be met, and now the delay would be condoned using Article 254 of the Constitution.

The cleric, the lawyer and the partyman