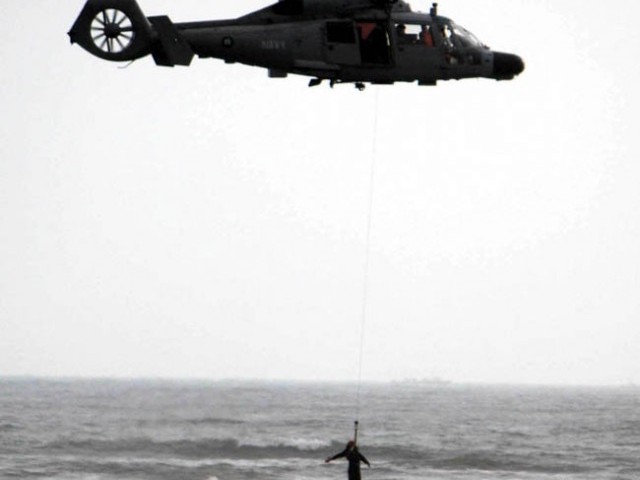 KARACHI: Multiple events were organised on Thursday in the provincial capital to mark 53rd Defence Day.

A guard mounting ceremony was held at Mazar-e-Quaid in which a contingent of cadets from Pakistan Air Force (PAF) took over guard duties at the mausoleum of the father of nation.

Air Vice-Marshal Nadeem Sabir laid a wreath on the grave of Quaid-i-Azam and offered fateha.  The ceremony was witnessed by a large number of people, including students from various schools and colleges.

A ceremony was also held at PAF Masroor Base to celebrate Defence Day. Governor Imran Ismail was the chief guest at the event that was also attended by Southern Air Command Air Officer Commanding Air Vice-Marshal Ahsan Rafiq.

The governor performed the ribbon cutting at the event that featured various PAF aircraft in addition to ground support and other auxiliary equipment.  Flying display by PAF F-16, JF-17, Mirage and F7 PG Aircraft was also performed which drew admiration from the spectators.

Prayers were also offered for martyrs of armed forces who laid down their lives for the sovereignty of their motherland. A pledge was made to make the air force stronger than ever so that it could face any challenge.

Pakistan Navy organised an aerial show at Sea View to commemorate Defence Day. The governor graced the occasion where mock exercises were carried out by the Navy that showed how the force countered various attacks via land, air and sea.

A simulated rescue operation was also shown which featured a helicopter and paratroopers. A large number of general public, media personnel and VIPs were present at the venue to witness the show.

“We must remember sacrifices of our army who sacrificed their future for our present, and due to them we are living peacefully in an independent state,” said Karachi University Vice-Chancellor (VC) Prof Dr Muhammad Ajmal Khan, while addressing a gathering at the Arts Auditorium of the varsity.

Dr Khan added that all Pakistanis were like soldiers who were deployed at various places. Nobody can stop our progress if we fulfil our responsibilities, he maintained. 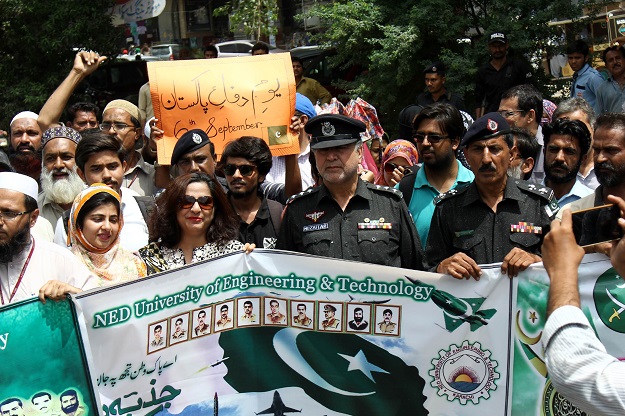 “September 6 reminds us of great sacrifices of our valiant soldiers. Let’s pledge that we will safeguard the geographical and ideological frontiers of our country,” the VC said, adding that during the 1965 war Pakistani nation alongside their military defeated the designs of the enemy and demonstrated to the world that it knew how to defend its motherland.

Dr Khan also drew the attention of the audience towards educational issues in the country. We must accept that we are lagging behind in education, he said, adding that as a nation we must be aware of our weaknesses and strengths.

Youth are our greatest asset, said Prof Azad Bin Haider. He also stressed the need for improving the standards of education. If a nation is to be destroyed, its education has to be targeted first, he said.

Prof Haider recalled the speech of then president Ayub Khan that he made to the country hours after the 1965 war broke out. According to the speaker, the president’s speech gave courage to the nation after which civilians joined hands with the army to defeat the enemy.

Faculty of Arts and Social Sciences Dean Prof Dr Muhammad Ahmed Qadri said terrorists wanted to deprive Pakistani children of education. We must recognise sacrifices given by our army men for the country, he added.