Three's a crowd: The road to presidency

Three's a crowd: The road to presidency 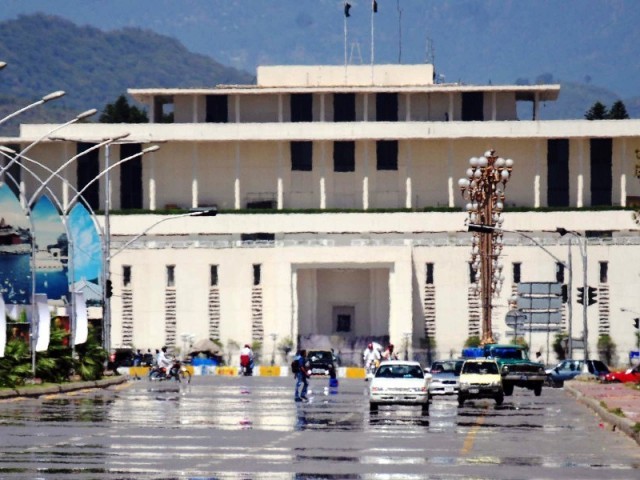 ISLAMABAD / KARACHI: The parliament and four provincial assemblies will elect the 13th president of the country today (Tuesday) in a three-way contest after the last minute efforts of opposition groups to jointly contest polls against the ruling coalition’s candidate Dr Arif Alvi failed to yield results.

Hectic efforts by the opposition groups to win each other’s support continued till late Monday night. However, later they blamed each other for the division, which will benefit Alvi whose party, the Pakistan Tehreek-e-Insaf (PTI), expects an easy win.

On Monday afternoon, the Jamiat Ulema-e-Islam-Fazl (JUI-F) chief Fazlur Rehman – who is also the candidate of opposition groups led by the Pakistan Muslim League-Nawaz (PML-N) – had a meeting with the Pakistan Peoples Party (PPP) Co-chairman Asif Ali Zardari.

Fazl insisted that the PPP withdraw its candidate, Aitzaz Ahsan, in his favour but Zardari refused and rather asked Fazl to retire and support PPP’s Aitzaz. After long parlays, Fazl proposed that the PPP should approach and convince the PML-N chief Shehbaz Sharif if it wants him to withdraw.

“Maulana insisted on his candidature and we stood our ground. Finally Fazl said he had been nominated by the opposition parties, and we should approach the PML-N,” a PPP leader who was part of the meeting told The Express Tribune.

A PPP delegation later in the night also met the PML-N chief Shehbaz Sharif for wooing him but failed to win his support. Fazl and the PML-N leader Ayaz Sadiq later told reporters that no headway could be made and the opposition parties, except for the PPP, would be voting for Fazlur Rehman.

Division in opposition ranks over fielding of a joint candidate started when the PPP unilaterally nominated Aitzaz Ahsan and sought support of other opposition groups. The PML-N, the second largest party in parliament and largest among opposition groups, declined to support the PPP nominee.

The incumbent President Mamnoon Hussain took oath on September 9, 2013 and his five-year term is set to expire on September 8. According to Clause 4 of Article 41 of the Constitution, which deals with matters related to presidential election, “Election to the office of president shall be held not earlier than 60 days and not later than 30 days before the expiration of term of the president in office.”

This means the election for new president was due by August 8. However, the Constitution explains that in case the assemblies are not functioning, the presidential poll will be held within 30 days after the general election which was held this year on July 25.

Going by the constitutional provision, the presidential poll was due on August 23. However, this deadline also could be met, and now the delay would be condoned using article 254 of the constitution.

Procedure for election to president

In accordance with Article 41 (3) of the Constitution, the president is elected by parliamentarians and provincial legislators during special sessions of the Senate, the National Assembly and four provincial assemblies through secret ballot.

The Electoral College comprises 706 lawmakers with each member of the upper (104) and lower (342) house of the parliament having one vote.  To ensure equal representation, each provincial assembly is allowed 65 votes – equal to the total number of members in the assembly with the least members, that is, the Balochistan Assembly.

There are a total of 51 vacant seats right now. By-elections are due on 37 seats vacated mostly by those who were elected on more than one seats in July 25 general election or the seats where elections were postponed due to death of any contestants.  Eleven of these vacant seats are in the National Assembly; nine are in the Khyber Pakhunkhwa; 13 in Punjab and two each in Sindh and Balochistan.

In addition, to these there is one reserved seat for women vacant in the NA. At one K-P assembly seat –PK-23 Shangla – the Election Commission of Pakistan (ECP) canceled results as less than 10% women polled votes at the constituency. The Senate is also short of two members, further reducing size of the Electoral College.

The process of vote of the president is laid down in detail in the second schedule of the Constitution and the Presidential Elections Rules 1988. The chief election commissioner is the returning officer for presidential elections, while the chief justices of the high courts of the four provinces and the Islamabad High Court (IHC) act as presiding officers.

Ballot paper to be marked with cross

A voter has to put cross mark ‘X’ with a special pen tagged as ‘copying pencil’ against the name of candidate, he/she is voting for. This is unique procedure given in the Presidential Elections Rules 1988. Voters cannot put any other mark than the ‘X’. The tricky process renders many votes invalid.

A ballot paper is declared invalid, if there is any name, word, or mark by which the person voting may be identified or if it does not contain the initials of the presiding officer.

The ballot paper is also declared invalid if the ‘X’ mark is placed against the names of two candidates or if there is any uncertainty as to the identity of the candidate against whose name the mark is placed.