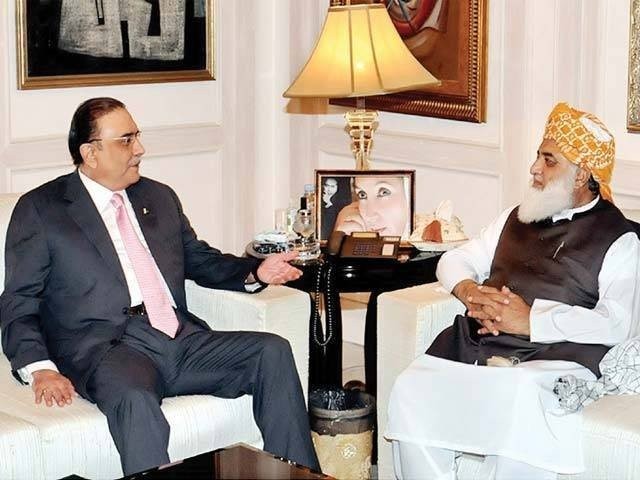 According to the Express News, the JUI-F chief told Zardari that he would scrap his name from the race based on 'certain conditions'. PHOTO: EXPRESS/FILE

ISLAMABAD: Last ditch opposition efforts to develop a consensus on a joint candidate in the presidential election failed to break the deadlock between the Pakistan Muslim League-Nawaz (PML-N) and the Pakistan Peoples Party (PPP).

Sources say that Rehman expressed his willingness to withdraw his candidature from the presidential election race, however, he was the candidate of other opposition parties, therefore, he could not withdraw unilaterally.

According to the Express News, the JUI-F chief told Zardari that he would scrap his name from the race based on ‘certain conditions’.

Rehman, however, made it clear that he was not only the candidate of the Pakistan Muslim League-Nawaz (PML-N) but also of all the other opposition parties.

Moreover, he added that he could not take such a decision alone but would need to take all the other political parties, including PML-N President Shehbaz Sharif, on-board.

After the meeting PML-N leaders Ayaz Sadiq and Marriyum Aurangzeb met Rehman and held a consultative meeting on the opposition’s strategy for the presidential election being held on Tuesday.

However, hours earlier, it is believed that, the PML-N had come to a decision to abstain from voting for Ahsan.

Talking to reporters, Rehman said that a combined opposition will not withdraw in favour of a single party.

The JUI-F chief urged the PPP to withdraw Ahsan from the contest for the sake of opposition unity.

Three’s a crowd: The road to presidency