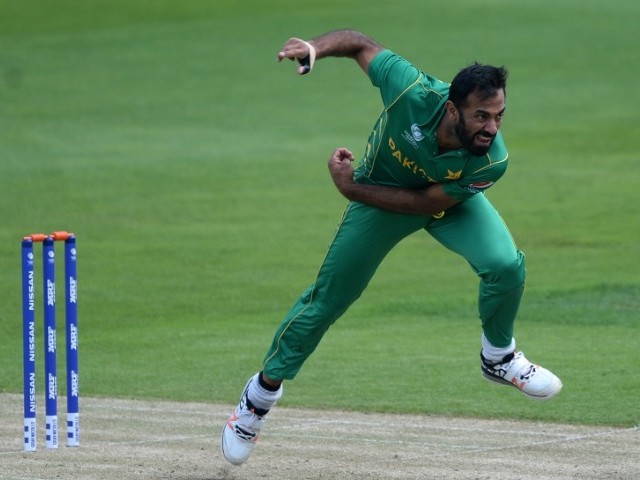 Left-arm pacer Wahab Riaz has revealed that his only aim at the moment is to cement a spot in the Pakistan squad for the 2019 World Cup in England and Wales.

Riaz, who has represented Pakistan in 79 ODIs, has not played an international match since October 2017, after being dropped following a series of poor performances.

But the 33-year-old, who recently had an impressive stint in the Vitality T20 Blast, where he took 15 wickets and scored 152 runs for Derbyshire, has reiterated that his primary objective is to play for Pakistan.

“It’s never easy to try and find a permanent place in a strong team like Pakistan which is doing so well at the moment,” Riaz told PakPassion. “This is especially true when you are talking about Pakistan’s very effective bowling line-up. But I know that I made my debut for Pakistan when our bowling was very strong and I believe I can do it again. At the moment, being selected for the 2019 World Cup for Pakistan and performing well is my main, and only, priority.

Riaz added he would never give up on his mission to represent Pakistan whenever possible.

“It is my only desire as a professional cricketer and as a Pakistani to continue playing for my country. Playing for your country gives one great satisfaction. Moreover, being selected to play for a strong team like Pakistan means that you have to be one of the best fast-bowler in the world, so it’s a matter of honour and pride to see your name on the Pakistan team list and something I will never give up on.”

When Riaz was dropped from the squad, Pakistan head coach Mickey Arthur criticised his work ethic in the training sessions, but the Peshawar Zalmi-pacer believes the 50-year-old was only highlighting the areas where he can improve on.

“I’m not sure if he was actually questioning my work ethic as in my opinion, he was merely providing feedback on areas of my game that he feels I can improve on,” Riaz explained. “It is no secret that Mickey has been very firm about having a high-level fitness target for all the boys and I sat down with him before coming to England. We had a long chat about my fitness and training regime and Mickey provided his feedback on areas I can improve on. Mickey felt that I could do better, and I agree with his opinion because as a fast-bowler, especially in Test cricket, you cannot survive if you are not 100% fit.”

Talking about his critics, Riaz revealed he is focusing on his performances rather than listening to what people have to say about him.

“The critics are doing what they do best and painting their version of the picture, but the reality is different, especially if one considers my performances in the past 12 months where I have played only one Test against Sri Lanka in the UAE, the PSL and put in some excellent performances during my stint with Derbyshire,” said Riaz. “Instead of worrying about critics, I am focusing on improving my economy, my bowling in death overs, contributing with the bat and most importantly my fitness which is now a requirement for playing in any format of cricket.”