Special squad formed to deal with street crime in Korangi

Special squad formed to deal with street crime in Korangi

New force compri­ses around 100 cops that have been traine­d by the army
By Faraz Khan
Published: August 28, 2018
Tweet Email 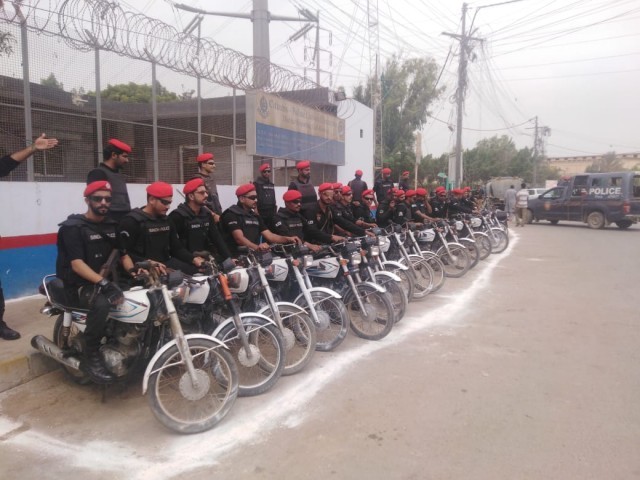 KARACHI: With street crime witnessing a surge in various parts of the city in recent months, District Korangi police has established a dedicated squad to counter the rising incidents of street crime in the district.

Incidents of snatching of mobile phones, cash, jewellery and vehicles have always been a burning issue in the city. Not only residents of posh localities have suffered from street criminals but middle-class localities such as those included in District Korangi have also witnessed rampant incidents of mugging.

The decision to form a separate squad to deal with street crime came after District Korangi police reported hundreds of cases of mugging within the first eight months of the ongoing year. People lodged complaints against snatching of mobile phones, wallets, cash and other valuables on a daily basis.

Apart from residential areas, District Korangi is home to one of the largest industrial zones of Karachi where industrialists, traders and workers are being targeted by robbers almost every day.

To deal with rampant incidents of mugging, the District Korangi police has come up with a specialised squad, named the anti-street crime force.

“This is not a common anti-street crime squad of police,” Korangi SSP Sajid Sadozai told The Express Tribune. “The squad consists of police personnel that have received training from the army.”

According to SSP Sadozai, the specialised anti-street crime squad comprises around 100 cops who will perform duties on at least 50 motorcycles. “This quick response squad will be linked to Madadgar 15,” the officer explained. “The nearest squad would reach the crime scene on getting news about any criminal activity.”

The team will also remain in touch with the industrialists and factory owners and will have their contacts so that they can promptly react to incidents of street crime.

District Korangi police is hopeful that the new force will help eradicate street crime in the district. “Definitely, there will be a massive decrease in street crime cases following the patrolling by police personnel trained by Pak Army,” the SSP remarked. “We will eliminate street crimes from Korangi,” he resolved.

Shedding light on the operating mechanism of the squad, SSP Sadozai said each police station in District Korangi is divided into various beats with every beat covered by two motorcycles and four police constables.

There are 10 police stations in District Korangi, in the limits of three of which street crime is rife. They include Zaman Town, Awami Colony and Korangi Industrial Area police stations and the new squad will be more vigilant in the areas covered by these police stations, said the SSP.

The sanctioned strength for the 10 police stations is 1,900, however, the actual strength is only 1,200.

“There are about a dozen gangs operating in Korangi,” the officer explained. He added that 152 street criminals have been identified so far.