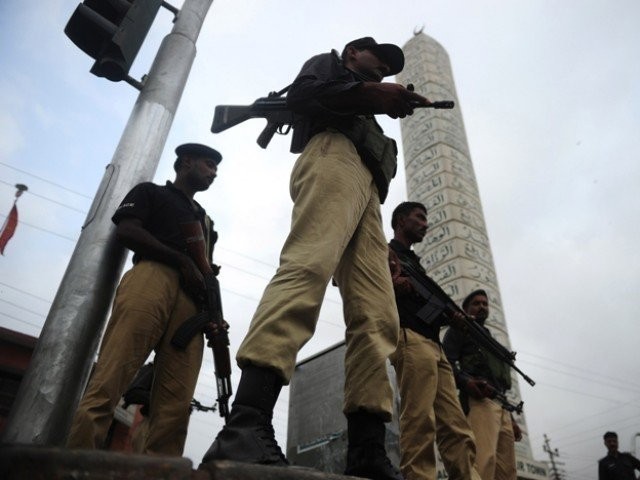 KARACHI: Police claim to have recovered on Tuesday explosive material from a grave in a graveyard located in District West.

The explosive material, including ready-to-detonate bombs were found hidden in a grave at a graveyard near Pareshan Chowk in Orangi Town within the limits of Mominabad police station.

According to District West SSP Omar Shahid Hamid, a special party was formed to conduct a raid on a tip-off about the presence of explosive material. After digging the grave, the police team recovered two bombs, one made in a bottle and the other in a container, SSP Hamid said, adding that both bombs were ready to detonate.

Apart from the bombs, the police team also recovered other explosive material, including six detonators, a remote control along with a circuit, a remote with battery, detonating wire, safety fuse, 9,980 grammes aluminum powder and 6,302 grammes of dynamite.

Balls fly where bombs once used to

A case was registered against unidentified persons and further investigation is under way.

Separately, District Central police claimed to have made headway in the case of the mysterious killing of a young woman in New Karachi.

A couple of months ago, Ramsha was killed and her brother, Wajahat, was critically injured when unidentified persons entered their home in New Karachi and hit the victims with iron rods. The police claimed to have arrested on Tuesday a key suspect allegedly involved in the incident. He was identified as Hassan Ali.

His arrest was announced during a press conference held by District Central SSP Dr Rizwan Khan.

According to SSP Khan, the victims had borrowed some Rs5,000 from Ali and were not returning the money to him.

Ali, along with his cousin, then killed Ramsha and injured her brother, said SSP Khan, adding that they took the victims’ mobile phones away with them which were switched on between May 26 and May 31 and were being used by a person, namely Danish.

The police traced the mobile phones and managed to arrest the key suspect after interrogating Danish.

A case was registered while further investigation is under way.