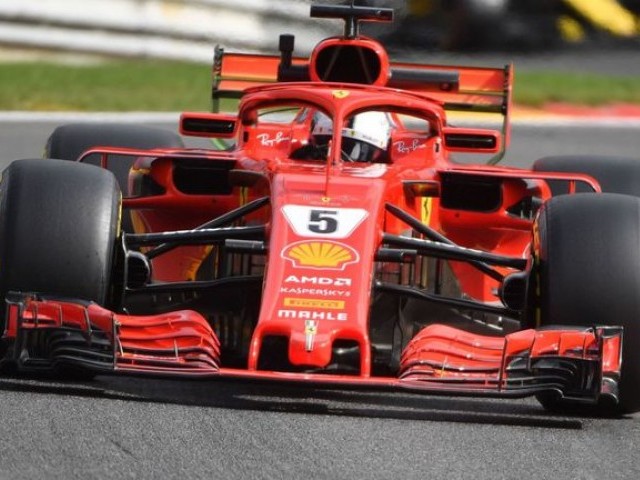 The four-time former champion clocked a best lap in one minute and 44.358 seconds at the spectacular Spa-Francorchamps circuit in the Ardennes to outpace nearest rival Max Verstappen of Red Bull by one-tenth of a second.

Championship leader and fellow-four-time champion Lewis Hamilton was third quickest, three-tenths off the pace in his Mercedes, ahead of Kimi Raikkonen in the second Ferrari.

Valtteri Bottas, who will start Sunday’s race from the back of the grid after collecting penalties for the installation of a limit-breaking new Mercedes engine, was fifth quickest ahead of Renault-bound Daniel Ricciardo in the second Red Bull, who only took part in the final minutes of the session.

Both of the leading teams, Mercedes and Ferrari, introduced upgraded engines.

It was the first time that Vettel or a Ferrari had topped the times in a Friday morning session this year and his lap was 1.2 seconds quicker than the fastest at the same time a year ago.

Ricciardo’s late lap pushed Esteban Ocon down to seventh in the leading Force India ahead of Renault’s Nico Hulkenberg and Sergio Perez in the second Force India running under new ownership for the first time.

Carlos Sainz, who heads to McLaren to replace Fernando Alonso next season, was 10th in the second Renault ahead of Pierre Gasly of Toro Rosso, who will switch to Red Bull as successor to Ricciardo next season.

Briton Lando Norris made an impressive debut for McLaren in Alonso’s car, winding up 18th, two places ahead of Stoffel Vandoorne whose future with the team remains in doubt.

Hulkenberg will join Bottas at the back of the grid having also taken a new Renault engine, his fourth, like Bottas, this year.