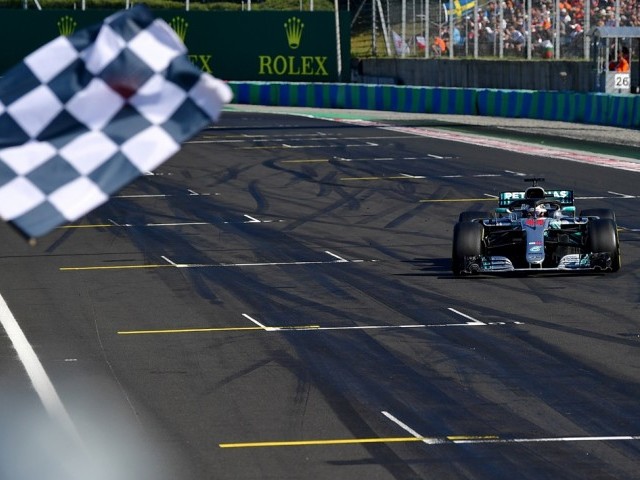 BUDAPEST: Lewis Hamilton leads Formula One into the August break by a healthy margin but, despite winning from pole position in Hungary on Sunday, the champion feels Mercedes still have some catching up to do.

Ferrari had looked favourites for victory at the Hungaroring but could not show their true race pace after Hamilton and teammate Valtteri Bottas made the most of a wet qualifying on Saturday.

The circuit is famously difficult for overtaking and Bottas, however much it pained him to be told, proved an excellent ‘wingman’ in keeping the Ferraris behind while Hamilton built a buffer.

Hamilton, now 24 points clear of Ferrari’s Sebastian Vettel after 12 of the 21 races, will head off on holiday a happy man but also recognising he is in a different kind of fight this year compared to 2017.

“This year we all know that Ferrari really do have the upper hand pace-wise,” said the Briton after his fifth win of the campaign. “But to win a championship is not just about speed, it’s about how you manage things, the strategy calls you make, mistakes, all these different things weigh up.”

While Mercedes have made some glaring strategy mistakes, Vettel has made more errors in the heat of battle than his rival.

The Briton has now won six times in Hungary, more than any driver, but has yet to do so and take the title in the same season.

There is still plenty of work to do if he is to break that streak, even if Hamilton is well ahead of where he was this time last year when he went into the August shutdown 14 points adrift of Vettel.

“We’ve got things to improve, we’ve got performance to bring moving forwards. We’ve got to try and catch them,” said Hamilton of Ferrari’s perceived pace advantage. “But we’ve got to continue to keep rising with all the other elements, which allows us to beat the Ferraris when they don’t bring their A game.”

The second half of the season has been good for Hamilton in the past, with the Briton coming back strongly last year to clinch his fourth title. He rejected a suggestion that he had a couple of fingers on a fifth already, however.

“Absolutely not. I think it’s far too early and you’ve seen the ups and downs we’ve had from this year, you’ve been ahead by some points and behind some points,” he said. “A lot can happen moving forwards but what’s really important is that we continue to keep up the pressure and keep working as we have done until now. There’s nothing we really need to alter.”

However, the Brit knows he cannot afford to become complacent. “It’s important to capitalise on those difficult weekends such as this and I think that’s really been a key strength of ours this year,” he added.

Belgium is next up, followed by Italy, and Hamilton won both of those last year. But before then he can enjoy a few weeks of down time. “Now it’s holiday, I’m going to meet my mum and my sister and niece and nephew tonight and I’ll spend the next four or five days with them,” he said on Sunday. “It’s not too often I get to do family holidays so that’s something I’m looking forward to.”

Luiz excited about working with Sarri