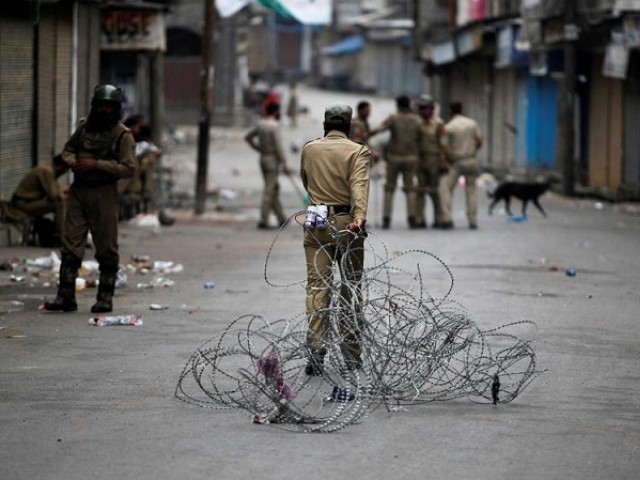 An Indian policeman pulls concertina wire to lay a barricade on a road during a curfew in Srinagar July 12, 2016. PHOTO:REUTERS/FILE

An officer and three policemen were killed in a series of attacks in Indian-occupied Kashmir’s Kulgam district, Kashmir Media Service reported on Thursday.

A bullet-riddled body of a local Bharatiya Janata Party (BJP) leader was also recovered in Pulwama district after anti-Indian, pro-Pakistan demonstrations in Srinagar on Wednesday.

After Eidul Azha prayer, people took to streets in large numbers in various territories in IoK raising slogans including “We want freedom” and “Go India go back”.

Former Chief Minister Farooq Abdullah was booed when he appeared in Hazratbal Shrine in Srinagar.

Dozens were injured after Indian forces fired pellets, opened teargas shells on protesters and charged with batons at Eidgah and Dargah Hazratbal in Srinagar, Achajipora and Janglat Mandi in Islamabad, Sopore, Palhalan and Kupwara areas.

Thousands led a march and hoisted the Pakistani flag in Kishtwar town of the Jammu region.

The United Resistance Leadership expressed serious concern over the use of brutal force against the demonstrators and denounced occupation authorities for the conditions of imprisoned political prisoners in the occupied territory and India.

The Joint Resistance leadership said that many people have been kept behind the bars for years together and those booked by Indian agencies like the Enforcement Directorate and the National Investigation Agency were being kept in solitary confinement and deprived of medical facilities.