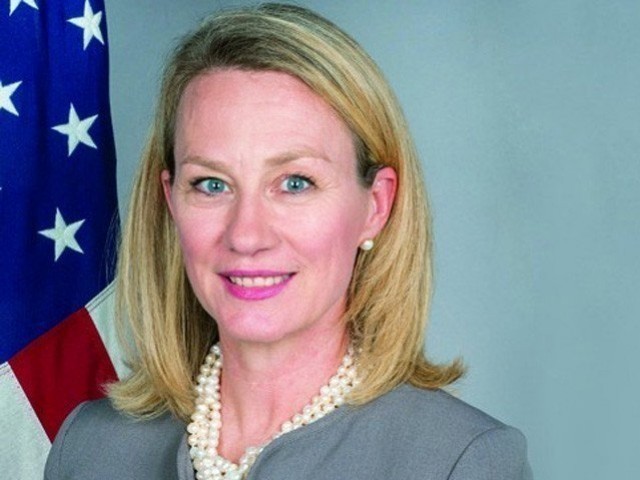 “We welcome the words of PM Imran in which he discussed the importance of peace on both sides of Pakistan’s borders,” said US Principal Deputy Assistant Secretary of State for South and Central Asian Affairs Alice Wells during a news briefing.

Ambassador Wells maintained that Pakistan “has a critical role to play in the stabilisation of Afghanistan” and appreciated efforts taken by the two countries to improve their bilateral relations.

The US statement comes as hostility intensifies in the war-torn country with the Taliban on a general offensive in many regions of the country.

“We have encouraged Pakistan to take stronger steps to ensure that the Taliban either come to the negotiating table or are expelled back into Afghanistan rather than enjoy a safe haven outside of the country,” said the US envoy while reiterating the role the country wants Pakistan to play in Afghanistan’s future.

The statement by the senior US diplomat came after Afghan President Ashraf Ghani’s provisional declaration of a three-month ceasefire with the Taliban in a televised broadcast on Sunday.

The announcement followed a bloody week of fighting across Afghanistan which saw the Taliban launch a massive assault against the provincial capital Ghazni.

Anticipation had been mounting ahead of Ghani’s speech following mixed signals from the presidential palace over whether the government would offer a fresh truce – following a brief, unprecedented ceasefire earlier in June.

NATO secretary general Jens Stoltenberg tweeted: “I encourage the Taliban to demonstrate their concern for Afghans by respecting it.”
Ghani’s announcement was also swiftly welcomed in neighbouring Pakistan, which has long been accused of fostering links with the Taliban’s leadership and providing sanctuary to its fighters.

But it is ordinary Afghans who have borne the brunt of the violence in the grinding conflict, especially in Kabul, which the United Nations has said is the deadliest place for civilians in the country.

The Taliban did not immediately respond to the offer but in a message from its leader published over the weekend to mark the upcoming Islamic holiday of Eidul Azha the group continued to push for direct talks with the US.

Washington has repeatedly refused, saying negotiations must be Afghan-led.

Last month, however, Taliban representatives met US officials for talks in Qatar, though little is known about the details of the meeting.