Says projec­t has power to develo­p not only Baloch­istan but Pakist­an as well
By Mohammad Zafar
Published: August 12, 2018
Tweet Email 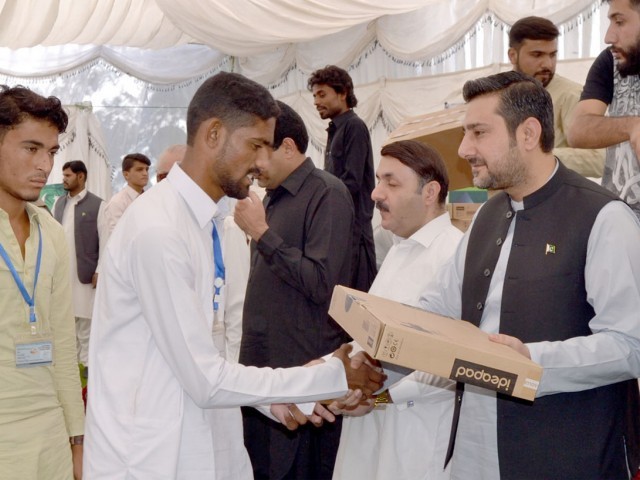 QUETTA: Caretaker Balochistan Chief Minister Alauddin Marri has assured the students of provincial government’s full help in developing their modern educational skills, saying the youth should be prepared to obtain the benefits of the China-Pakistan Economic Corridor (CPEC).

“Students of Makran division are blessed that this project starts from their cities,” said the interim chief minister while addressing a laptop distribution ceremony at the CM House on Saturday. Students from the Makran division were given laptops.

Marri said, “CPEC has the power to develop not only Balochistan, but Pakistan as well. Fortunately, Pakistan has been blessed with a talented young generation that has the ability to take the country out of the current challenges.”

He said the provincial government had been paying keen attention towards education, adding that the previous Balochistan government allocated 25% of the annual budget for educational development.

“We have many precedents of the world where the young generation played a vital role and resolved their countries’ crisis. Our country is also filled with skilled and educated youngsters who will resolve the challenges Pakistan is facing,” said Marri.

Marri stressed upon unity among all sections of the society living in Pakistan, saying, “We can’t assume ourselves as one nation by standing under a single flag. Unity will only prevail when we give respect to each other without looking at sectarian differences.”

He said, “Our enemies want to divide us but we have shown them that Pakistan is one nation by defeating all their moves of stoking hatred among us.

“Our brave armed forces have been fighting terrorists disrupting educational and development activities in Balochistan. Our security forces and intelligence agencies are not alone in this war against terrorism as the whole nation is standing with them.”

PTI, BNP to decide reserved Balochistan seat over flip of a coin