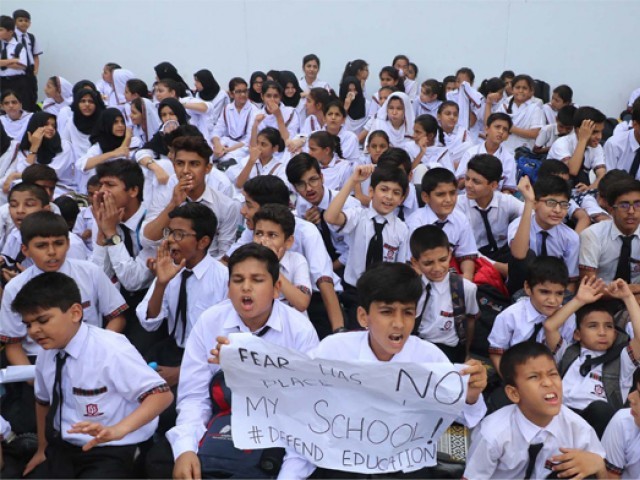 Students of a private school protest against sealing of their school. PHOTO: ONLINE

KARACHI: A private school in Gulshan-e-Iqbal Block 18 was sealed on Thursday by the Sindh Building Control Authority (SBCA) as it was being operated on residential plots. However, the school was de-sealed after the administration took up the issue with relevant authorities.

The school, where more than 500 students are currently enrolled, was recently shifted to two residential bungalows facing the main University Road. According to the SBCA order that was pasted on the school gate, plot number B-147 and B-148 of Gulshan-e-Iqbal Block 18 were sealed under section 7-A of the Sindh Building Control Ordinance 1979-82. “If anyone trespasses the premises/plot or breaks the seal, he/she/they shall be punished under section 19 of the SBCA ordinance -1979 or any other section permissible under the law,” it reads.

Section 7-A of the ordinance deals with violations of certain provisions of the ordinance that have been included in the Section 6(1) which says that “no building shall be constructed before the authority has in the prescribed manner, approved the plan of such building and granted no objection certificate for [its] construction”.

According to the SBCA’s official statement, the school was operating in a residential building. “A residential plot cannot be used for the commercial purpose,” the statement says, adding that in order to change the land use, the owner of the plot has to get a no objection certificate from competent authority.

70% children out of school in capital’s slums

The building control authority also claimed that residents of the area had complained about the school, which prompted it to seal the building.

Meanwhile, the school administration claimed that the SBCA had given no prior notice to it before taking action. “SBCA sealed the school building after a resident of the vicinity complained that they are facing prolonged traffic jams during school drop-off and pick-up hours,” said the school owner, Sana Faheem, who is also the principal and is running the school in a rented building.

“We have been operating this school in the area for the past seven years and just a few months back, we relocated on the main road side,” she said, adding that there were numerous schools operating on residential plots and the SBCA should take action against all such schools if it sealed her school on such pretext.

Teachers and students were surprised to see the school sealed when they reached it in the morning. Staff and more than a 100 students had to face trouble as they had to wait on the adjoining footpath, while the administration negotiated with the authorities. A student also passed out while waiting outside the building.

The school was de-sealed after successful negotiations. The SBCA directed the school administration to get its land-use changed in two months.

According to a notice later issued by the SBCA, the de-sealing was allowed after the owner submitted an undertaking that she will have the land accordingly converted from the master plan department within 60 days.