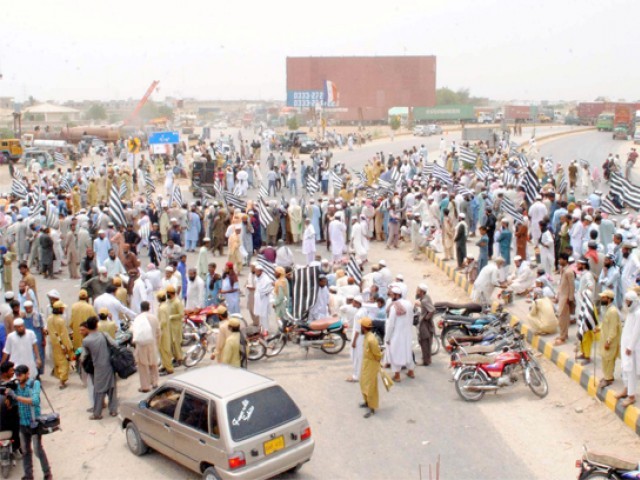 Supporters of JUI-F staging a protest on Hatri Bypass in Hyderabad. PHOTO: PPI

KARACHI / HYDERABAD: The Jamiat Ulema-e-Islam-Fazl (JUI-F) held on Wednesday protests across Sindh against the alleged rigging in the general elections that were held on July 25.

JUI-F leaders and supporters gathered at least three locations in Karachi, including alAsif Square, Paracha Chowk in Shershah and Hub River Road. They rejected the elections results, calling it a selection instead of elections. The JUI-F workers claimed that extensive rigging was carried out due to which the polls had lost all credibility.

According to the protesters, a conspiracy was hatched to keep JUI-F chief Fazlur Rehman at length from the National Assembly. They demanded that elections be held again in a transparent manner.

The JUI-F supporters held banners and placards inscribed with allegations of rigging and the demand for fresh polls. They also chanted slogans against rigging. The protests resulted in congestion on the adjoining roads with long queues of cars piled up.

Addressing the participants of the protest on Hub River Road, JUI-F leader Qari Usman said that the mandate of the people of Pakistan was stolen on July 25. He claimed that the entire country was protesting against the elections results. The JUI-F leader demanded the resignation of the Chief Election Commissioner and other officer bearers of the Election Commission of Pakistan (ECP), alleging that they used Rs21 billion taxpayers’ money to make one person win.

Usman asked the judiciary to hold the ECP accountable for wasting Rs21 billion and investigate the rigging that took place on July 25.

At the Sohrab Goth protest, local JUI-F leaders Maulana Ghayas, Maulana Abdul Rashid Naumani and Maulana Inayatullah termed July 25 as the darkest day in the history of the country. They also reiterated the JUI-F’s demand for fresh elections. The speakers said they would accept the results of the transparent elections and welcome whichever party emerged victorious after it.

Rigging in general elections could not be tolerated in any case, said JUI-F leaders. They declared that they would continue holding peaceful protests across the country until their party leadership asks them otherwise.

The JUI-F also held protest demonstrations against rigging in various districts of Sindh, including Hyderabad, Larkana and Shaheed Benazirabad. Decrying rigging, the protesters blocked highways in some districts by staging token sit-ins. The protests lasted between two and six hours.

“The people’s mandate has been stolen and given to a particular political party [Pakistan Tehreek-e-Insaf],” alleged Nasir Khalid Mehmood Soomro, brother of JUI-F Sindh chief Rashid Mehmood Soomro, while addressing the protest in Larkana. “The ECP failed to conduct free and fair elections in the country.”

Nasir and other speakers reiterated the allegations that their polling agents were evicted from the polling stations during the vote count and that they were also not given Form 45 by the presiding officers. “These are evident examples of rigging,” Nasir contended. The protesters blocked the Larkana-Shahdadkot bypass, which connects the two districts of Larkana and Kamber-Shahdadkot.

The vehicles queued up for several kilometres on the M9 Motorway and the National Highway due to the JUI-F’s sit-in on the Hyderabad Bypass that lasted for around three hours. The bypass connects the two highways.

Maulana Taj Muhammad Nahiyon blamed the ECP for squandering taxpayers’ money on the process of selection in the guise of elections. “The religious leadership has been deliberately kept out of the assembly,” he alleged.

In Shaheed Benazirabad district, popularly known as Nawabshah, the JUI-F’s sit-in lasted for around six hours. It blocked the movement of traffic on the National Highway.