Police force to get martyrs’ package next week: CM Marri

Police force to get martyrs’ package next week: CM Marri 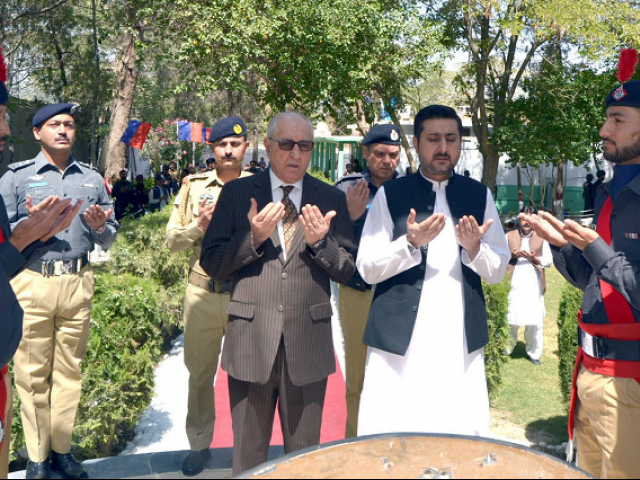 QUETTA: At long last, caretaker Balochistan Chief Minister Alauddin Marri has announced that the provincial government will issue notifications regarding the upgradation of the police force and the martyrs’ package next week.

“The brave officers of the police department sacrificed their precious lives while protecting the people of Balochistan. Now it is our responsibility to provide all facilities to their families and address their woes,” said the interim chief minister while addressing a seminar organised in connection with the Police Martyrs’ Day at the police line in Quetta on Saturday.

Lauding the efforts of the police force in eradicating terrorism from Balochistan, Marri said, “Police are fighting terrorists on the front line in our war against terrorism and their sacrifice for the country will always be remembered.”

“I want to assure that the notifications regarding police upgradation and shuhada package will be released next week in order to address the concerns of the families of the police officers martyred in the line of duty on immediate basis.”

Marri said, “Most of the martyrs displayed in the pictures are my friends and we cannot forget their ultimate sacrifice for the protection of our province.”

“We have been marking Police Shuhada Day across the country to remember their sacrifices rendered while fighting terrorists on the front line.”

Governor Achakzai lauded the sacrifices of the police officers, calling them “alive”.

He said that the martyred officers were still alive because today “we have been living in a peaceful environment due to their sacrifices”.

“Balochistan has been facing various challenges since Pakistan’s independence,” he said, adding that the biggest challenge in today’s era “is terrorism” and “our forces are standing on the front line for protecting the masses’ lives and property”.

On the election day suicide blast in Quetta’s eastern bypass area, Achakzai said, “After the attack with wounds bleeding our officers were standing outside the polling stations guarding voters.”