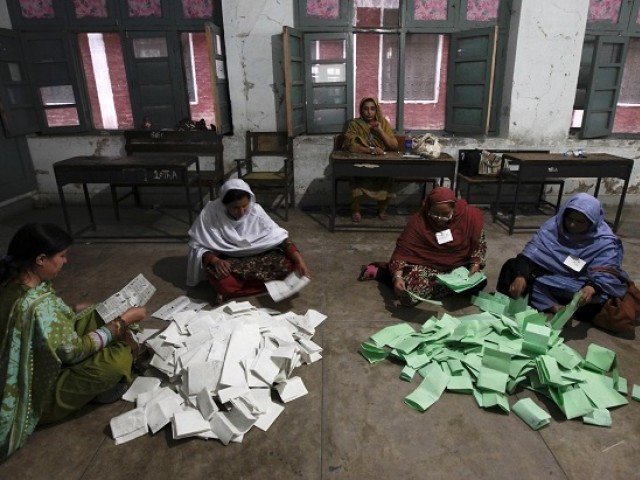 HYDERABAD: The Sindh High Court’s (SHC) Hyderabad-circuit bench has restrained the returning officers of four constituencies from officially notifying the election result. The court, however, dismissed on Friday a petition of former National Assembly speaker Dr Fehmida Mirza to stop the recount in the NA-230 constituency from where she has been elected for the fifth consecutive time.

The constituencies whose results have been withheld until the hearing of the petitions in the SHC include NA-215 in Sanghar, PS-48 in Mirpurkhas, PS-54 in Tharparkar and PS-82 in Jamshoro.

Haji Khuda Bux Rajar of the Grand Democratic Alliance (GDA), who secured the second-highest votes in NA-215, complained of rigging in his petition. His counsel, Advocate Jhamatmal Jethanand, maintained that Rajar’s polling agents were evicted from all polling stations on election day and the ballot papers were counted in their absence. The Form 45 was also not handed over to the agents, he added.

According to him, the RO’s preliminary result declared Pakistan Peoples Party’s Naveed Dero as the winner but with a thin margin of only 585 votes. Dero polled 77,812 votes and Rajar 77,227 votes.

The petitioner filed an application to the RO on July 28, praying for a recount. However, the RO neither accepted nor rejected the petition and, on July 29, the RO consolidated the results and issued Form 48.

“The Form 48 doesn’t show the number of ballot papers issued to all the polling stations [in the constituency], which has rendered the entire counting process unfair, unjust and in violation of the Elections Act, 2017,” he argued.

The GDA and Muttahida Qaumi Movement-Pakistan backed independent candidate Syed Ali Nawaz Shah, who was a runner-up in PS-48 in Mirpurkhas, also prayed to the SHC for a recount. Shah obtained 36,241 votes against the PPP’s winning candidate Syed Zulfiqar Ali Shah’s 38,097 votes.

His lawyer, Advocate Noorul Haq Qureshi, also contended that the petitioner’s agents received Form 45 from only a few polling stations among 131 in the constituency. As many as 3,248 votes were rejected in the count in PS-48.

Shah requested the RO for the recount but his plea was rejected on July 28 even though the vote difference is within the 5% threshold. Subsequently, he forwarded his request to the Election Commission of Pakistan (ECP), but did not receive a reply.

“All the agents of the petitioner were ousted from the polling station and thereafter the ballot papers were counted in their absence,” claimed the runner-up of PS-54 in Tharparkar, PPP’s Dost Muhammad Rahimon in his petition. He also alleged that Form 45 was not given to his agents.

Dost Muhammad received 24,844 votes while the GDA’s Abdul Razzaq Rahimon polled 25,955 votes. The petitioner also maintained that the RO rejected his application for the recount while the ECP has yet to make a decision on his request. According to him, the consolidated results in Form 48 do not show the number of ballot papers issued to all the 120 polling stations in the constituency.

Former PPP MPA Dr Sikandar Shoro, who contested as an independent candidate against PPP’s Malik Asad Sikandar in PS-82, Jamshoro, made a similar contention in his petition. His lawyer, Barrister Farogh Naseem told the court that Dr Shoro’s agents were forcibly sent out from the polling stations before the vote count and that they received Form 45 from only four polling stations. The RO rejected his application for the recount, he added.

The SHC conditionally restrained the ROs in all the four petitions from notifying the election result “if the same have not yet been notified”. The court put the ROs, ECP and other respondents on notice for August 6 in Shoro’s petition and for August 7 in the other three petitions.

Meanwhile, Dr Mirza’s plea to stop the recount in NA-230 in Badin was rejected. She had prayed to the court to suspend ECP’s July 30 directives to the RO to complete the recounting.