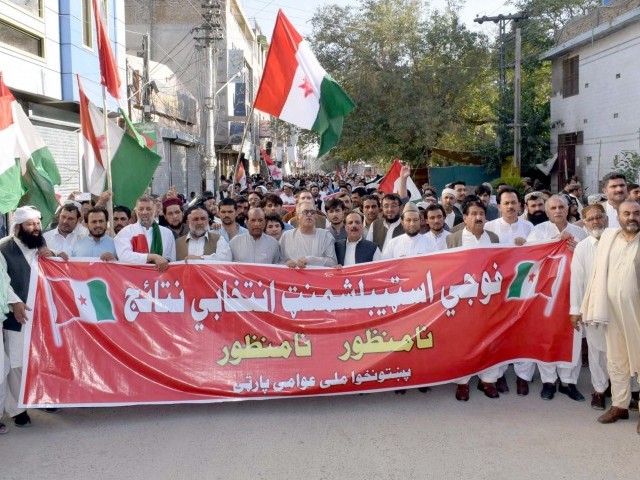 QUETTA: The Pashtoonkhwa Milli Awami Party (PkMAP) on Friday staged a massive protest demonstration outside the Quetta Press Club, alleging that the elections were engineered by invisible hands to suit a certain party.

All the senior leaders of the party addressed the protesters who chanted slogans against what they called the inability of the Election Commission of Pakistan to hold free and fair elections.

Former planning and development minister Hamid Achakzai alleged that ECP had lost its powers to hidden elements and held it responsible for altering the results of the polls.

The party called protest across the Pashtun belt of the province and their workers protested in Quetta, Chaman, Qilla Abdullah, Ziarat, Zhob and other cities of Balochistan.

The party leadership gathered in Quetta and led the protest in front of QPC where Hamid Achakzai, the only elected MPA, Nasrullay Zerray, Babat Lala and others addressed the protesters.

“In the first phase, we have called for protests across the Pashtun areas of the province. Later, there will be shutter down and wheel-jam strikes against the suspicious attitude of ECP and the protests shall intensify gradually,” said Zerray.

He said that not only PkMAP but all major political parties in the country had been demanding re-elections as blatant rigging was reported in the July 25 polls.

“The Election Commissioner of Pakistan should resign immediately for having failed to hold impartial elections,” they demanded.

Work on Quetta cancer hospital to start next month