Home side takes a 1-0 lead in the five-match series­
By AFP
Published: August 4, 2018
Tweet Email 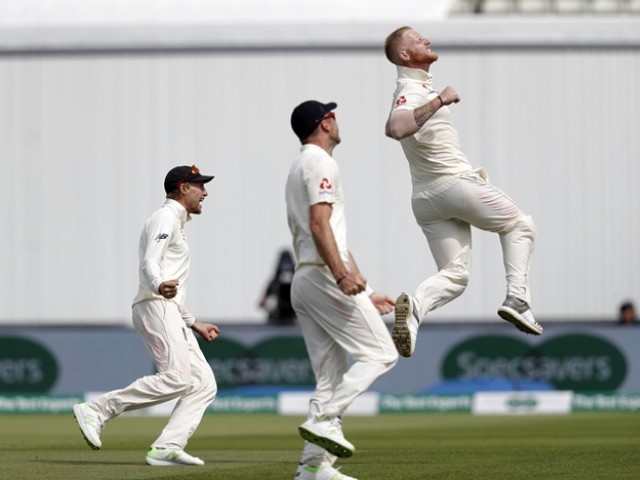 BIRMINGHAM: Ben Stokes took three wickets on Saturday, including the prize scalp of India captain Virat Kohli, as England won the first Test by 31 runs in a thrilling finish at Edgbaston.

The all-rounder, who could miss next week’s second Test of a five-match series at Lord’s because of a court trial on a charge of affray starting Monday, took two wickets in an over including that of Kohli.

Stokes ended the match, England’s 1,000th Test, when he had Hardik Pandya (31) caught at first slip by Alastair Cook, with India bowled out for 162, having been set 194 to win.

Stokes finished with innings figures of four for 40 in 14.2 overs.

However, fellow England all-rounder Sam Curran was named man-of-the-match after starring with both bat and ball.

That England had a target of 194 to defend was largely down to the 20-year-old Curran’s 63, his maiden Test fifty in just his second match at this level rescuing the hosts from the depths of 87 for seven.

Curran’s innings came just a day after the Surrey left-arm swing bowler’s Test-best haul of four for 74 during India’s first innings of 274 that featured a brilliant 149 by Kohli — his maiden Test century in England.

An elated Stokes told Sky Sports: “Virat played a brilliant knock in the first innings but moments like that (getting him out) change games. I am proud to be part of his group. I thought we were a bit behind yesterday (Friday) but for Sam Curran to play the way he did was a real turning point.”

A stunned Curran added: “I can’t take it all in, it is all very special.”

For England captain Joe Root there was the relief of seeing his side win the first Test of a series after a run of three straight defeats in campaign openers against Australia, New Zealand and Pakistan.

“I am thrilled, it was a fantastic team performance,” said Root. “I asked the guys to play with passion and show belief. If we did that, we would give ourselves a chance.”

Meanwhile Kohli urged India to remain “positive and fearless” during the rest of the series.

I’ll go to bed dreaming of getting Kohli out: Anderson

“It was a great game of cricket and I was glad to be involved in such a fantastic Test match,” said Kohli. “We showed character at times but England were relentless in the areas they hit.

He added: “Our bowlers were outstanding in the second innings. Hopefully we will build on that. There is no hiding from this game. We have to play positive and fearless.”

Saturday’s play started with the match on a knife edge.

Given the sunny conditions in Birmingham, the only certainty then was the match would finish with more than a day to spare.

Kohli was 43 not out and wicket-keeper Dinesh Karthik unbeaten on 18.

England knew they needed early strikes and James Anderson, their all-time leading Test wicket-taker, duly obliged when he had Karthik (20) caught low down by Dawid Malan at second slip off just the sixth ball of the day.

It was a morale-boosting moment for Malan, who had dropped three slip catches this match, including flooring Kohli on 21 and 51 during the star batsman’s first-innings century.

Kohli then completed an 88-ball fifty when he glanced Anderson down to fine leg, the fourth four of his innings.

India were 141 for six, needing 53 more runs to win, when paceman Stokes had Kohli lbw for 51 with just his third ball of the day.

Three balls later, Stokes had Mohammed Shami caught behind for a duck and India were 141 for eight, with their hopes of just a seventh win in 58 Tests in England fading fast.

And when Sharma was lbw to leg-spinner Adil Rashid’s googly for 11, India had been reduced to 154 for nine and soon afterwards Pandya nicked Stokes to Cook.