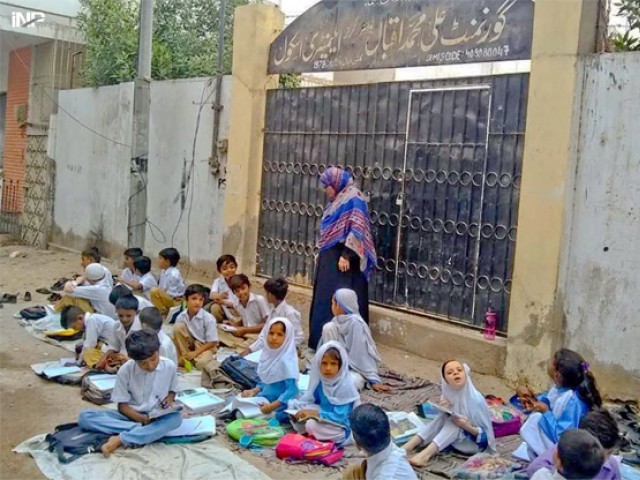 Students of Ali Muhammad Iqbal Government School in Gulshan-e-Iqbal had to take classes on the road outside the school after it was found locked in the morning. PHOTO: INP

“When we reached the school in the morning the gates were locked and we had no option but to return,” said Ali Muhammad, a student of the school. It was then that the headmaster, Tariq Javed, came and decided to conduct the classes on the road just outside the school.

The news of the alleged attempted encroachment of the school circulated and media vans soon lined up outside the school. Talking to The Express Tribune, Javed said that before the incident on Wednesday, some people had barged inside the school claiming ownership of the building. He said that the school’s building was in rickety shape and the Education Works Department was carrying out some construction work inside.

According to Javed, land grabbers have been trying to grab the school, which occupies an area of 600 square yards, for the last three months. For this purpose, he has also filed an application to the secretary and director of the education department, a copy of which is available with The Express Tribune.

“This school has been functional since 1978 but for the last few months, some individuals have been claiming their ownership over the school,” the application reads and adds that the encroachers also forcibly stopped construction work initiated by the Education Works Department. He had later requested the authorities to resume the construction work, which was later resumed.

Illegal land allotment of Safari Park: SHC issues notices to revenue board, others

After the incident gained coverage on media, the Caretaker Education Minister Dr Saadia Virk Rizvi took notice and asked the secretary of education to inquire into the matter. “If any employee of the Sindh Education Department is found guilty in the incident, strict action will be taken against them,” she said. After this, the police reached the school, broke all the locks and allowed the educational activities to resume inside.

According to the police, a lady named Sobia has been claiming the ownership of the school and threatening the school staff. An FIR of the incident has been lodged at the Gulshan-e-Iqbal police station under sections of encroachment on public property and life threats against Sobia’s alleged henchman, Sobu Khan. Two sub-inspectors, Sajid and Riaz Mehr, have also been accused of being in connivance with Sobia. They were also nominated in the FIR.