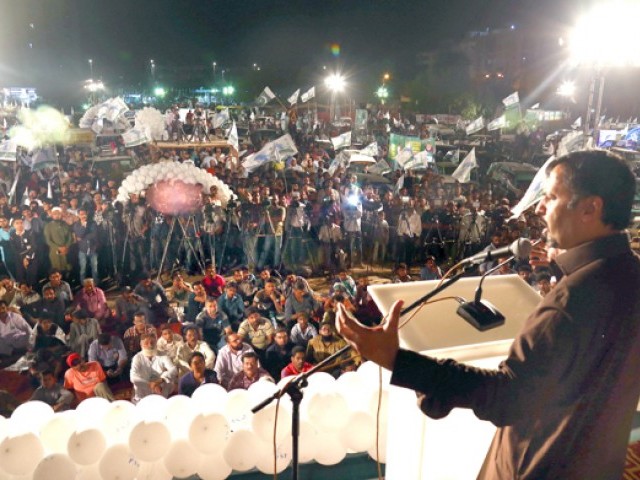 KARACHI: After a few weeks of actively engaging in their show of strength and canvassing for votes in various constituencies, political parties concluded their campaign for the 2018 general elections on Monday night at 12am.

The election is to be held tomorrow (Wednesday, July 25) on 61 national and 130 provincial assembly seats in Sindh. Around 22.39 million voters in the province will decide the fate of contestants.

Pakistan Peoples Party Chairperson Bilawal Bhutto Zardari, who visited several places across the country for electioneering, concluded the election campaign in NA-200 Larkana, one of the constituencies from where he is a candidate.

During his campaign, Bilawal visited Shikarpur and Jacobabad on the same truck used by Benazir Bhutto for her homecoming rally, which came under attack at Karsaz in Karachi. He also visited Garhi Khuda Bux where he offered fateha and paid homage to his grandfather Zulfikar Ali Bhutto and his mother Benazir. The PPP chairperson addressed a large crowd in Larkana. It was his first visit to Larkana after many days of the election campaign.

“We are not afraid of these threats. This is the same truck used by Shaheed Benazir Bhutto. We are a party of martyrs and are ready to sacrifice our lives for people and this country,” he said.

The MQM-P concluded its campaign after holding a big power show at Liaquatabad Flyover where senior leaders of the party, including Dr Farooq Sattar, Amir Khan, Dr Khalid Maqbool Siddiqui, Faisal Subzwari and others, addressed a large crowd.

The PTI, which put a grand show at Jinnah Ground a day earlier, culminated its campaign in NA-243 and NA-247 from where Imran Khan and Dr Arif Alvi are contesting respectively.

The GDA, an alliance of various anti-PPP political parties and groups, concluded its campaign in Pir Jo Goth where its chief Pir Pagara, spiritual leader of Hur Jamaat, and other leaders spoke to their supporters.

The PSP leaders made its last call to people in the Hakeem Saeed Ground in Gulshan-e-Iqbal where Mustafa Kamal, Raza Haroon, Wasim Aftab, Dr Sagheer Ahmed and other leaders of the party repeated their promises to make Karachi a model city of South Asia.

The PML-N arranged a large public gathering in NA-249 from where PML-N President Shehbaz Sharif is in the fray. PML-N leaders Miftah Islamil, Saleem Zia and others addressed the gathering.

Shahi Syed addressed an ANP event in Landhi to conclude his party campaign. “We are not cowards. The attack is not against us, but our enemies are targeting democracy in Pakistan,” he said, referring to the recent suicide attack on an ANP corner meeting in Peshawar. “Despite the threats, we will contest the polls and win the elections,” Syed said.

The traditional hustle and bustle associated with elections was not witnessed in the city during the campaigning period for the elections scheduled for tomorrow.

No electioneering slogans were chanted in many areas of the city. People who have memories of prior elections claimed that it did not feel that the general elections were taking place.

Being apparently disillusioned due to their unresolved issues over the years, residents of Karachi seem to have lost interest in electioneering activities.