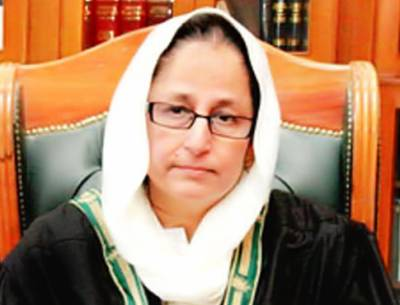 LAHORE: Chief Justice of Pakistan (CJP) Mian Saqib Nisar on Monday nominated Justice Syeda Tahira Safdar as the Chief Justice of Balochistan High Court (BHC), paving way for her to become the first female chief justice of any court in the country.

“Madam Tahira Safdar will be the next chief justice of BHC,” he announced.

Justice Nisar said that he will never even let a scratch come to the institution, referring to the matter of Justice Siddiqui’s fiery speech against state institutions.

“Unfortunately, a few forces are trying to undermine and weaken the judiciary, I will never let that happen,” he remarked. “As long as the Supreme Court exists, no threats against democracy will succeed.”

BHC’s incumbent Chief Justice Muhammad Noor Meskanzai is scheduled to retire on September 1 this year. He was sworn in on December 26, 2014 after Justice Qazi Faez Isa was elevated as a Supreme Court judge.

Interestingly, Justice Safdar was the first woman to be appointed as a civil judge in Balochistan, besides having the distinction of being the first lady to be appointed in all posts she served. She was also the first female high court judge.

According to her profile on BHC’s website, Justice Safdar is the daughter of Syed Imtiaz Hussain Baqri Hanafi, a renowned lawyer.