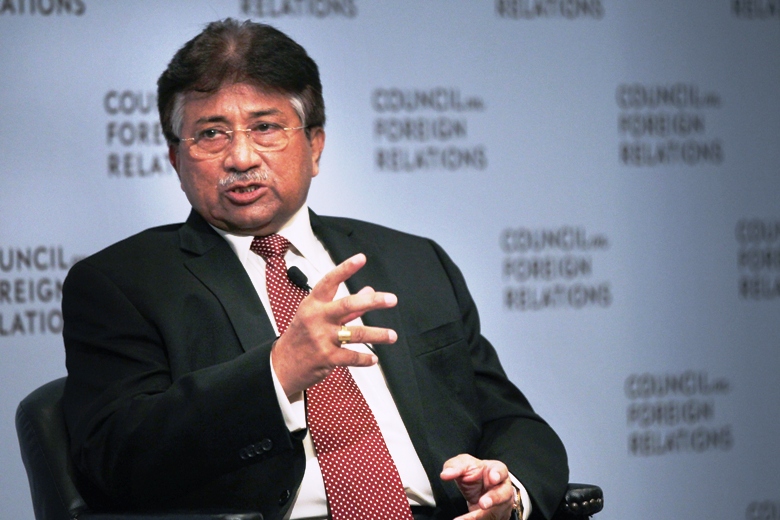 The petitioner had called for barring the former president from heading his party. PHOTO: FILE

ISLAMABAD: While former PM Nawaz Sharif insists that he is facing reprisal for initiating a treason case against former military ruler Pervez Musharraf, the PML-N government is yet to issue a notification regarding the composition of the Special Court for the same trial.

The treason case was instituted on the charges of subverting the Constitution by imposing ‘emergency rule’ on November 3, 2007.

The CJP suggested the new composition after Chief justice of the Peshawar High Court Yahya Afridi recused himself from hearing the case on March 29.

Justice Yawar Ali is set to retire on October 22 this year and it remains to be seen if the proceedings could conclude before his retirement.

Sources in the law ministry told The Express Tribune that the notification would be issued after the federal cabinet’s approval. The summary has been sent, but it had not yet made to the cabinet’s agenda, they maintained.

The cabinet is likely to hold its last meeting next week. Contrary to Nawaz Sharif’s narrative, PML-N’s top hierarchy did not appear to be much interested in notifying the special court’s composition.

A PML-N lawyer blamed the interior ministry, led by Ahsan Iqbal, for the delay. Even a member of the prosecution team also expressed concern over the delay.

Vice-Chairman of the Pakistan Bar Council (PBC) Kamran Murtaza criticised the PML N government, saying why they initiated the treason trial if they did not have the courage to pursue it to the end.

He told this correspondent that the PML-N leaders were playing ‘good cop bad cop’: the elder brother is targeting the military establishment while the younger brother (Shehbaz Sharif) was constantly in touch with them. “This strategy will not work,” he said.

Interestingly, it was the apex court, led by former Chief Justice Iftikhar Muhammad Chaudhry, which had stressed upon the federal government to file a treason case against Musharraf.

In June 2013, a statement was submitted before the apex court for initiating the treason case. Subsequently, former PM Nawaz Sharif also announced this in parliament.

On February 26, 2016, the SC directed the court concerned to expedite the trial without any unnecessary delay.

However, the SC allowed the federal government and the special court to take independent decisions regarding Musharraf’s custody.

On the same day, the former president flew to Dubai after his name was removed from the ECL. He has been living there since.

Musharraf had been indicted in the treason case in March 2014 after he personally appeared before the court and rejected all charges.

On April 28, prosecution’s head Akram Sheikh requested the special court to decide the case in the absence of Musharraf.