Allege­s Imran to be a “hypocr­ite who will do anythi­ng to get power”
By News Desk
Published: July 23, 2018
Tweet Email 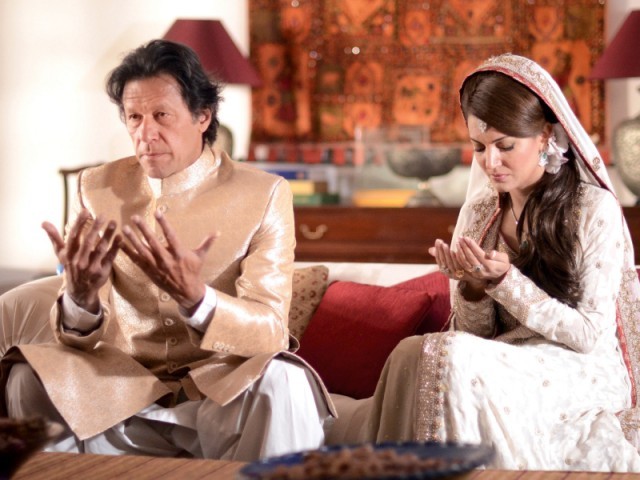 Reham Khan has called out on Imran Khan saying she married the Pakistan Tehreek-e-Insaf chief because she believed in him and his mission but it turned out to be ‘fake’.

A few days after the release of her autobiography, the journalist, in an interview with Christina Lamb, referred to her ex-husband as a “hypocrite who will do anything to get power” and said he would be a disaster for the country [if elected as the prime minister]. She said the PTI chief was so spoiled he could not use a cashpoint or a microwave.

“He’s the only celebrity we have in Pakistan and expects everyone to do everything for him,” she said. “I told him, you’re like Rapunzel in the tower — you have no connection to real life.”

She added: “He’s so narcissistic and single-minded about his goal [of becoming prime minister] that he forgets the appropriate emotional response to things.”

While Imran Khan’s party spokesperson has said the party “will deal with all irrelevant and non-issues after the elections,” many PTI supporters have dismissed Reham’s book as “the ravings of an embittered ex”.

Reham is a British-Pakistani journalist and single mother of three. She had moved to Pakistan five years ago and met the cricketer-turned-politician for the first time while interviewing him. Telling her he had something important to discuss, he invited her to his house for dinner after a second interview.

“I went because of the journalist in me,” she said. When he proposed marriage, “I thought he was out of his mind. Then I realised he was completely serious.”

I’ve made mistakes in life, but marrying Reham has to be the biggest: Imran

Imran was persistent. “I wasn’t so much flattered as he pestered me to death. I guess we all want a little romance in our life.”

Their marriage lasted less than a year. While Reham was traveling to the UK for a conference, Imran sent someone to hand over a bag of jewelry as payoff.

In an interview with British newspaper Mail Online, the PTI chairman referred to his failed marriage to Reham Khan as his life’s biggest mistake. Imran married Bushra Maneka, 39, who is a Sufi spiritual guide, in February this year.

This article originally appeared on The Times

Justice Siddiqui to be dealt according to law: CJP