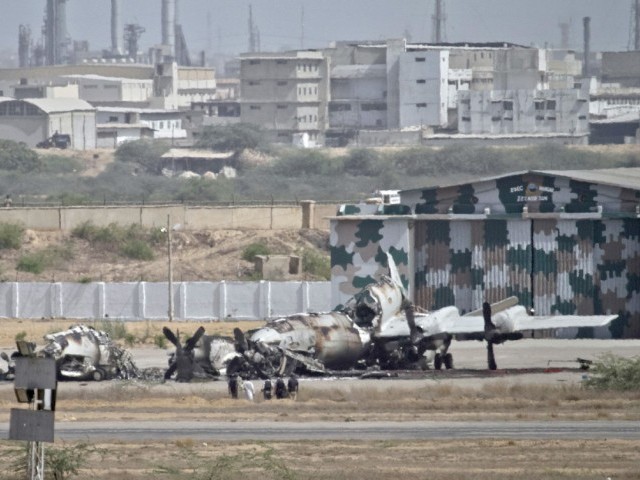 KARACHI: PNS Mehran base Commander Raja Tahir has been replaced while Rear Admiral Tahseenullah Khan has been tasked with probing the terrorist attack at the base, but the navy has maintained that the replacement is not related to the recent terrorist assault on the navy airbase.

Base Commander Raja Tahir has been replaced with Commodore Khalid Pervaiz.

A navy spokesperson said that the decision to replace the base commander had already been taken and his tenure had been completed. He emphasised that the incident should not be linked to Sunday’s attack.

“Commodore Khalid Pervez is taking over as the base commander and his predecessor Raja Tahir will be assigned new responsibilities,” a navy spokesman, Commander Salman Ali, told AFP.

He did not say what new job the outgoing commander will hold.

Although the decision was announced just two days after the attack ended, Ali insisted the transfer was unconnected.”It is a routine and scheduled transfer. The base commander was scheduled to be replaced, even if there was no attack on the facility,” he said.”It has no link whatsoever with the inquiry of the incident.”

Sources said that an investigation team headed by Rear Admiral Tahseenullah Khan has started recording statements of officials present at the base at the time of the 17 hour terrorist siege.

Talking to media in Karachi, Prime Minister Gilani said the details of inquiry report will be disclosed when the investigation is completed. The prime minister claimed that there is no ambiguity about number of attackers who attacked the Naval base.

Sunday’s assault was the worst on a military base since the army headquarters was besieged in October 2009.

Timeline: Terrorist attacks in Pakistan in May 2011