The animal swims back and forth in barely 6ft long, 3ft deep and 3ft high in the video
By AFP
Published: July 2, 2018
Tweet Email 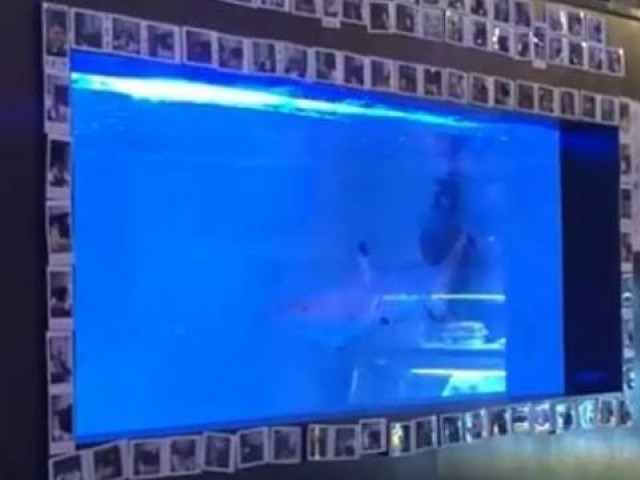 Shark swims back and forth in barely 6ft long, 3ft deep and 3ft high in the video. FACEBOOK SCREENGRAB

KUALA LUMPUR: A video of a blacktip shark being kept in an aquarium at a Malaysian restaurant has sparked online anger, with many calling for the animal’s release from its confining home.

The eight-second video posted on Facebook by a diver who went to the restaurant outside the capital Kuala Lumpur showed the animal swimming back and forth in the fish tank described in the post to be “barely 6ft long, 3ft deep and 3ft high”.

It had 17,000 views and 283 shares as of Monday, with many commenters expressing outrage at the animal’s cramped living conditions.

“Release the poor animal, this is absurd and so primitive,” Nicky Cooper commented on the Facebook post.

“How can anyone enter that place and eat or drink there?”

“Free Charlie the Shark!!” Luis ON wrote, referring to the animal’s name.

Blacktip sharks can be found in warm temperate and tropical waters along coastal areas across the world, ranging from the Atlantic to Indian and Pacific Oceans.

They can grow up to eight feet long and weigh up to 100 kg (220 pounds), according to the National Geographic website.

Targeted by commercial fisheries, the blacktip is classified as near threatened by protection group the International Union for Conservation of Nature (IUCN).

Malaysian Nature Society president Henry Goh said sharks belong in the wild and cannot be treated like domestic animals for commercial use.

“Sharks are free ranging and should be left free in its natural habitat, the open sea,”.

There are 68 species of sharks in Malaysian waters, though only one, the whale shark, is protected.

The animals are generally hunted by fishing vessels, with shark fin viewed as a delicacy by many Asians and often served as a soup at expensive Chinese banquets.

The person who posted the video under the Facebook account Renaza Resort Indonesia on June 29 said he had gone for dinner at the restaurant, which had murals of sea creatures, including sharks, on the walls.

“As a diver this got me all excited. As I walked into the cafe admiring the place and the underwater themed decor… 5 steps into the shop… to my horror I saw a Blacktip shark in an aquarium inside the cafe,” he wrote.

“Sitting in the cafe made me feel really sick and disgusted as I watched the shark swim in circles non-stop,” he added.

“I wanted to think of how to save this creature, it did not do anything to deserve being treated like this. THIS IS ANIMAL CRUELTY!!!!!!!!”

However, posts on local food blogs suggest the animal may have been kept there since April 2015.

Blacktip sharks can be found in warm temperate and tropical waters along coastal areas across the world.

‘Back from the dead’: South African woman found alive in mortuary fridge