CM Marri suspends MS, staff of hospital in Kuchlak for being absent from duty

CM Marri suspends MS, staff of hospital in Kuchlak for being absent from duty 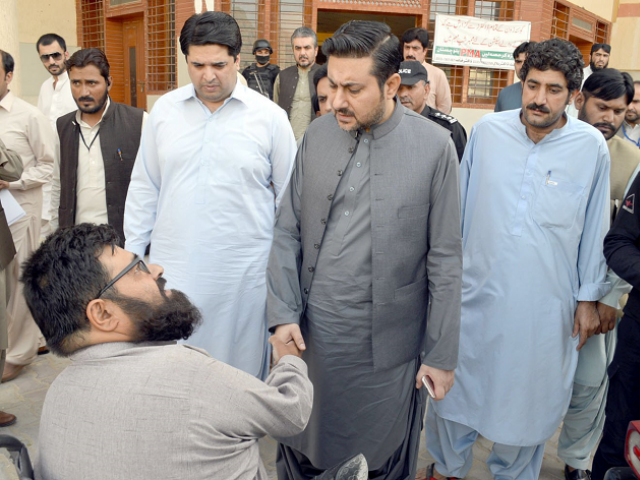 Caretaker Chief Minister Alauddin Marri interacts with a patient during his visit to the hospital. PHOTO: EXPRESS

QUETTA: Caretaker Balochistan Chief Minister Alauddin Marri on Sunday suspended the medical superintendent and staff of the Mufti Mehmood Memorial Hospital for being absent from duty and directed the health officials to issue a show cause notice to them.

“Despite allocating a major chunk of the provincial budget for the health sector, the plight of the patients at the government hospital has not been addressed as doctors and medical staff collect their salaries on time but are not present during the duty hours,” said the caretaker chief minister while conducting a surprise visit of the hospital located on the National Highway.

The lack of cleanliness at the hospital which is a serious threat to the lives of patients also aroused Marri’s indignation.

“Millions of rupees have been spent on the government hospital, but the negligence of our doctors and hospital staff has forced poor patients to approach private hospitals, which is unaffordable for them,” Marri added.

The chief minister also took notice of the lack of cleanliness of the hospital, particularly its operation theatre, and directed the health secretary to submit a report in this regard.

Separately, the chief minister visited the Kuchlak police station and reprimanded its station house officer over the lack of cleanliness at the station.

Marri directed the authorities to take immediate action regarding release of funds for the cleanliness of the police station. He also checked the FIR register to assess the performance of the police officers.