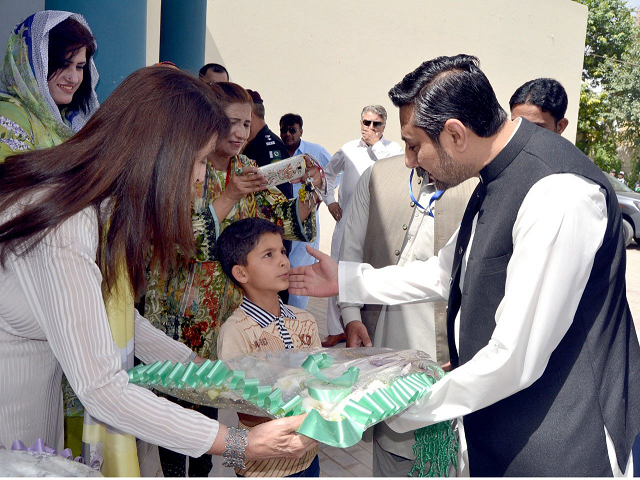 An orphan child presents a bouquet to caretaker Chief Minister Alauddin Marri upon his visit to SOS Children's Village in Quetta. PHOTO: EXPRESS

QUETTA: Caretaker Balochistan Chief Minister Alauddin Marri has said helping the destitute is amongst the most sacred duties in Islam as “our religion preaches us to include the suppressed people of society in Eid celebrations”.

“I will celebrate Eid with the children of the SOS village,” said the caretaker chief minister during his visit to the village in Quetta on Sunday.

Marri said, “After taking oath as the caretaker CM of Balochistan, I am paying my first official visit to the SOS Children’s Village to share my greetings with the orphans because helping poor is the most sacred job in my opinion.”

He urged the philanthropists to come forward and help the poor and suppressed people of the province on Eidul Fitr.

“I have been nominated to hold peaceful general elections in Balochistan, but I promise I will support the orphans during my tenure.

“Fortunately, Pakistan has hundreds of people and foundations helping the poor and fulfilling their needs. One such example is Abdul Sattar Edhi, who dedicated his entire life to help others.”

The caretaker CM applauded the services of the SOS Children’s Village in Quetta and said, “I will fully support the organisation for which if I have to beg, I will.”

“The welfare organisation is taking care of orphans throughout the province. It is providing them with quality education so that they can be able to walk the world.”

Balochistan still scrabbling over caretaker CM after third round of talks

During the meeting, he apprised the officials that the interim government “is responsible for conducting impartial elections by providing a peaceful environment to the voters” and directed them to put in their earnest efforts in holding free and fair elections in the province.

Marri was nominated as the caretaker CM of Balochistan by the Election Commission of Pakistan on June 7 after former chief minister Abdul Quddus Bizenjo and ex-opposition leader Abdul Rahim Ziaratwal failed in choosing one.

Marri was sworn in as caretaker CM Balochistan on June 8 (Friday). Balochistan Governor Muhammad Khan Achakzai had administered the oath.

He directed the local government to functionalise its machinery to ensure cleanliness in cities during Eidul Fitr.

“Free and fair elections is the prime responsibility of the interim government which will hold the realm of the province for two months,” he added.

“I am optimistic that voter turnout will be higher in Balochistan this time as compared with the turnout during the 2013 elections,” he said, adding that a security plan should be devised to provide people a sense of protection and prevent any chaos during election activities.