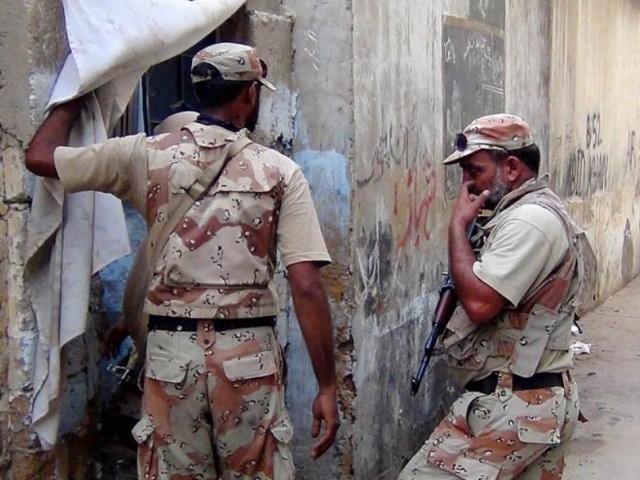 HYDERABAD / KARACHI: Rangers claim to have arrested a special assistant to the outgoing provincial government after raiding his residence and a petrol pump in Daulatpur taluka, District Benazirabad on Wednesday night. Ismail Dahiri, who is also an office-bearer of the Pakistan Peoples Party’s Nawabshah chapter, was arrested along with his brother and 40 other suspects, according to the Rangers spokesperson, who added that five Kalashinokovs, as many grenades and 12 magazines of the weapon were seized from their possession.

An FIR was later registered at Daulatpur Police Station on a police complaint, nominating the arrested suspects for possessing illegal weapons. Dahiri was blindfolded and led to the police station while a video leaked by the security sources also showed the seized weapons.

The raids seem to be part of a larger move by the Sindh Rangers to extend their scope of action outside Karachi. Until the PPP government was in power, the Rangers had made limited advances into the province’s territory outside the metropolis.

In the past one week alone, the paramilitary force, in collaboration with the police, has arrested at least 70 suspects, including the 40 detained on Wednesday, in around a dozen raids – breaking all previous records of the Rangers’ actions in rural Sindh during the PPP government’s tenure. These raids were conducted in Qambar Shahdatkot, Qasimabad area of Hyderabad, Nawabshah, Mirpur Mathelo, Mirpurkhas, Lalu Lashari Goth in Hyderabad, Khairpur, Naseerabad, Thatta and Larkana. All the suspects arrested in these raids were later handed over to the police for further legal action. The suspects, according to the Rangers officials, were allegedly involved in cases of murder, attempt to murder, kidnapping for ransom, extortion, rioting and violence.

Though the political affiliations of the suspects have not been disclosed, the Rangers officials claimed that the seized weapons were meant to be used against political rivals.

The series of raids in rural Sindh commenced on June 20 when the paramilitary force, in collaboration with the local police, arrested nine suspects after an exchange of fire in Gambat Taluka – an administrative subdivision of Khairpur District. The raid was conducted on the basis of a tip-off, according to the Rangers spokesperson, who added that a large cache of arms and ammunition was seized from the suspects’ possession.

The very next day on June 21, the Rangers raided a house in Larkana to arrest Badar alias Badru, Saddaruddin and Ahsan, who were wanted by the police in cases of murder, attempt to murder, land grabbing and drug peddling. The local police had also recommended putting up reward money worth Rs800,000 for information leading to the Badar’s arrest.

Later on the same day, the Rangers raided a house in the Shah Kamal neighbourhood of Thatta and arrested Ghulam Sarwar Khattak, who was allegedly involved in cases of murder, attempt to murder, kidnapping for ransom, extortion, gambling and possession of illegal arms.

Meanwhile, a Rangers official, speaking on the condition of anonymity, refuted rumours that the force had extended their scope of action after the PPP government’s tenure. “We are only assisting the police. We are operational in rural Sindh as per the notification of the home department issued under Article 147of the Constitution,” said the official.

For his part, PPP leader and former information advisor Maula Bux Chandio said it was the police department’s mandate to take action against criminals and that the Rangers had only been given special powers for Karachi. “The situation in Karachi was at its worst, which is why special powers were given to the paramilitary force,” he said. “The situation in rural Sindh is under control, so there is no need for an operation by the Rangers.” Chandio added that the Rangers may have taken targeted action on the request of the local administration, otherwise it was illegal for them to start a crackdown.