Twitte­ratti voice shock and anger, raise questi­ons about the terror­ist attack on PNS Mehran base.
By Naureen Aqueel
Published: May 23, 2011
Tweet Email 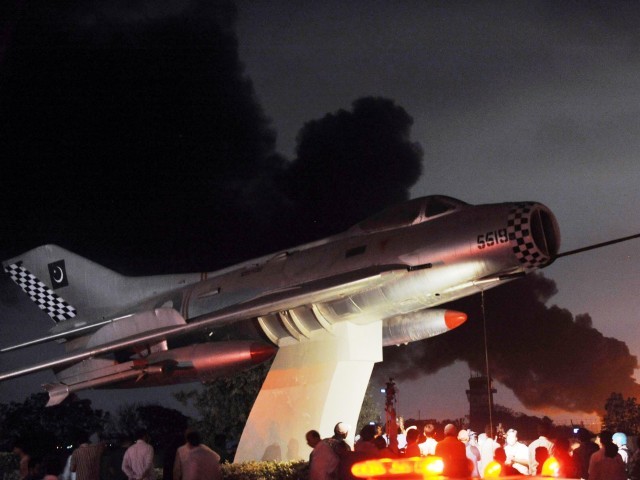 Flames and smokes rise from a Karachi's naval air base following an attack by militants.PHOTO: AFP

At least 12 people, including Navy and Rangers personnel, were killed late Sunday when more than 10 terrorists attacked the PNS Mehran base on Shahrah-e-Faisal Road, Karachi.

The attack created a buzz on Twitter with Pakistan’s popular Twitteratti not only tweeting and retweeting minute by minute updates of the incident, but also analysing the motives and implications of the attack and raising important questions.

Here is a round-up of some of the tweets:

The attack in Karachi is one more brutal example of the enemy with in being financed by the brotherly enemy outside. Wake up Pakistan

Time for Pakistanis to throw their weight behind the civilian government: no more military involvement. Slash the defence budget and spend it on citizens.

Many of us had been warning about Karachi as the new epicentre for al Qaeda operations. Sad that political parties and the Army did not pay much heed.

Went to sleep to my city under siege. Woke up to it under siege. Weirdest part is the rest of us just go to office and keep working.

Why has the attack on PNS Mehran become PMS India?

What good do public ‘condemnations’ and announcements that we have ‘taken notice’ of such events do? Does it ever lead to anything?

Operation at PNS Mehran over. Will Operation TRUTH now begin?