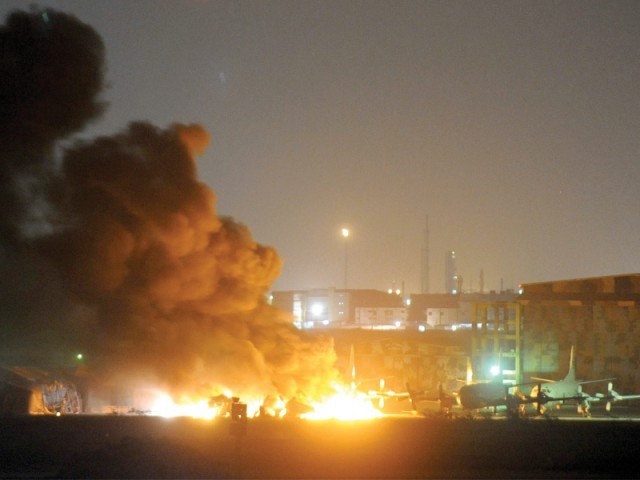 Flames erupt from a P3C-Orion aircraft at the Pakistan Navy aviation base Mehran in Karachi after a terrorist attack. PHOTO: AFP

Heavily-armed terrorists mounted a brazen attack on a Pakistan Navy installation adjacent to the Sharae Faisal on Sunday, killing at least four people, officials said, the fourth such attack on a heavily-guarded navy installation in the last four weeks.

Director-general public relations Pakistan Navy Irfanul Haq said that terrorists mounted simultaneous attacks on the base from the Main Gate, which is also called the Faisal Gate, the Museum Gate or the rear gate, and another vulnerable spot from the Shah Faisal Colony side.

He said they fired a number of rockets upon entering the base, one of which hit a hanger housing a P3C-Orion maritime surveillance aircraft which caught fire. He  said that no other aircraft had been damaged, but other sources said that at least three P3C-Orion had been damaged. Besides the P3C planes, there were also Fokker, Defender and helicopters at the base.

However, Interior Minister Rehman Malik said the militants had attacked from the rear of the base.

“We have been able to confine them to one building and an operation is underway either to kill or capture them.”

According to navy spokesperson Commander Salman, navy commandos and Marines were carrying out action against the terrorists. He said that the outer cordon was being mounted by Rangers personnel.

Haq confirmed four casualties in the attack and identified two of the deceased as Fireman Khalilur Rehman and Lieutenant Yasir.

Commander Salman Ali said: “An exchange of fire with terrorists is continuing. Their firing is fading away and we have launched a search operation.”

“It’s a terrorist attack. More than 10 terrorists are inside. They have attacked a navy air station located in a Pakistan Air Force base,” said Sindh home ministry official Sharfuddin Memon.

Eyewitnesses said that some of the terrorists arrived in three black-colored vehicles.

There were reports that some foreigners, presumably Americans, had been targeted in the attack, but the navy spokesperson denied these reports. Smoke and flames were seen rising from at least five spots, one of which was near a fuel depot.

An AFP photographer said he heard up to 10 blasts and periodic bursts of gunfire.

Army commandos in five or six trucks were also seen entering the base, while several vehicles of Rangers had also reached the spot.

Police, it is learnt, were not allowed to enter the base.

Official sources said that some of the terrorists had taken hostages and were engaged in a fierce firefight with the security forces.

They added that between 15 and 20 attackers were inside the base, and had attacked three hangars housing aircraft.

Al Qaeda-led Taliban militants, who have vowed to avenge the killing of their leader Osama bin Laden by US special forces, have carried out several attacks since his death on May 2.

The latest attack evoked memories of an assault on Pakistan Army headquarters in Rawalpindi in 2009, and revived concerns that even the most well-guarded institutions in the country remain vulnerable to militants.

There have been no immediate claims of responsibility for the latest attack though.

Meanwhile, Prime Minister Yousaf Raza Gilani immediately sent the interior minister to Karachi to “coordinate the security efforts being taken by the civil and military officials,” his office said in a statement.

He said such cowardly acts would not deter the country from fighting terrorism.

The standoff between the terrorists and navy commandos continued until the filing of this report.