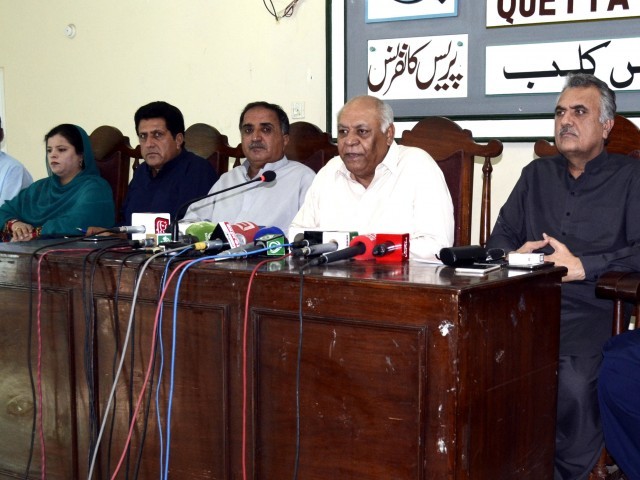 QUETTA: The National Party has unveiled its manifesto for the upcoming general elections, demanding all institutions in the country to be brought under parliament’s control.

The party manifesto for the 2018 elections was launched by NP President Senator Mir Hasil Bizenjo during a news conference at the Quetta Press Club on Sunday. The senior leadership of the NP, including Senator Kabir Muhammad Shahi, Yasmeen Lehri and others, accompanied Bizenjo.

Among the demands in the manifesto, one key one Bizenjo made was that a legislation should be introduced by the parliamentary committee for selection and sacking of the prime minister and appointments in the country’s major institutions, including the army and the Supreme Court.

Bizenjo demanded that the powerful institutions, including the army and intelligence agencies, must be brought under the full control of parliament, while the upper house of parliament should look after environmental affairs of the country.

“Leadership of Balochistan should be taken into confidence during the signing of any CPEC project and the control of Gwadar Port must be in the hands of Balochistan,” said the NP chief. “Instead of keeping the defence budget secret, it should be approved by parliament.”

He slammed the previous federal and provincial governments for their flawed policies and aggressive behaviour towards Balochistan and said, “Due to negligence of previous rulers, violence has increased in Balochistan.”

He said after consensus with political parties and institutions, NP would strive for the safe recovery of missing persons and steps would be taken for the return of IDPs, who left their homes due to the army action in Balochistan.

On clinching provincial autonomy from the Centre, Bizenjo said, “The NP will make sure that Balochistan has control over its resources and the people get their due rights.”

On Pakistan’s relations with its neighbours, the senator said, “The NP wants friendly relations with all neighbours and our priority will be to halt hostile agencies’ interference in Balochistan which is the modest way to bring peace.”

He pledged to end the culture of domicile in Balochistan.
On the interim set-up in Balochistan, Bizenjo said, “The Election Commission of Pakistan was the last hope of fair elections in Pakistan but the way in which Alauddin Marri was selected as the caretaker chief minister indicates pre-election rigging in Balochistan.”