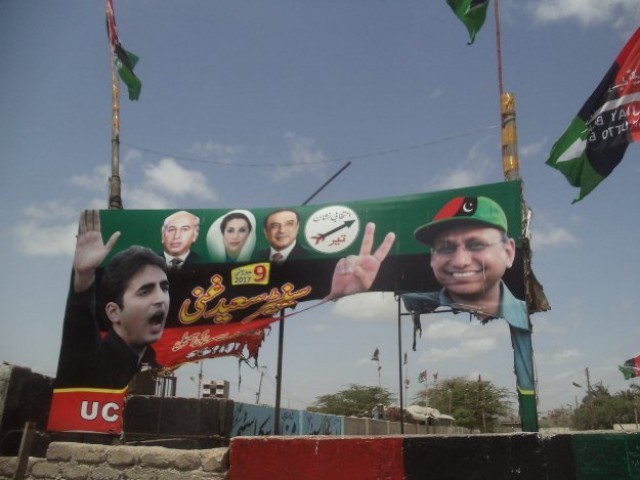 KARACHI: On the directives of the Election Commission of Pakistan, structured signboards of Pakistan Peoples Party (PPP) and Pakistan Tehreek-e-Insaf (PTI) have been removed from Sharae Faisal and Rashid Minhas Road.

According to District Municipal Corporation (DMC) East Chairperson Moeed Anwar, all such advertisements and banners have been removed from pedestrian bridges with the help of law enforcement agencies. Such advertisements, Anwar said, were illegal in light of the

Supreme Court’s (SC) order.
With the 2018 general election around the corner, Karachi’s skyline is being visually polluted by banners and advertisements inscribed with political messages cropping up on major thoroughfares across the city.

Signboards displaying the pictures and party affiliation of PPP candidate, Shahzad Memon, from PS-103 adorned light poles and pedestrian bridges on at least half of Sharae Faisal and Rashid Minhas Road, as well as smaller thoroughfares in Gulistan-e-Jauhar, which falls under the jurisdiction of DMC East and Cantonment Board Faisal (CBF). PTI’s candidate for NA-245, Amir Liaqat Hussain’s signboards decked the other half of Sharae Faisal.

In 2016, the SC had placed a blanket ban on advertisements on public properties. In its order, the apex court had ruled that there was no law permitting the installation of outdoor advertising billboards and signboards on ‘public property’. The court defined the term ‘public property’ as roads, sidewalks, islands in the centre of a road or service lane, overhead bridges and underpasses, overhead pedestrian walkways or bridges, roundabouts, green belts or dividers between a road, pedestrian lanes, nullahs and its banks.

However, there are still areas in Clifton and near Boat Basin where such political banners and advertisements can be seen and authorities are yet to take any action.