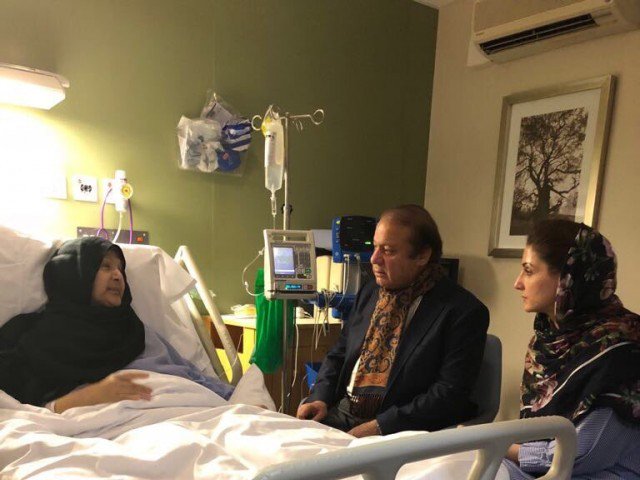 ISLAMABAD: An accountability court in Islamabad granted former premier Nawaz Sharif and daughter Maryam Nawaz a week’s exemption from the current corruption trial pending against them.

The duo on Tuesday applied for a seven-day exemption from the corruption trial taking place at an accountability court as they are already in London following Kulsoom Nawaz’s cardiac arrest.

In November 2017, Kulsoom was diagnosed with blood and throat cancer and was shifted to London for immediate medical care. Both Maryam and Nawaz have made numerous trips back and forth in the regard and on June 15, Kulsoom suffered from a cardiac arrest and was placed on a ventilator.

Judge Muhammad Bashir of the accountability court will hear arguments regarding the petition after a short break. Capt (retd) Safdar talked to the media outside the accountability court and urged everyone to pray for their mother Kulsoom. “We face trials in life, but God gives us strength. Nawaz and his family are facing a difficult time right now. Musharraf exiled him, but he came back, he always does,” Safdar said.

“No matter where Nawaz is in the world, the nation believes he can free the country from the shackles it is stuck in,” he added. “Imran Khan should not dictate the judiciary, he won’t benefit even if we are sent to jail. In fact, it will be a loss for him.”

In court, Nawaz’s counsel, Khawaja Haris, who had earlier recused himself from the case, returned. His withdrawal application had not been accepted so he doesn’t need to submit a new one to resume the case. In today’s hearing, Haris drew the court’s attention to another application he filed counting the days left for the Supreme Court deadline and how the case should proceed henceforth.In the application, Haris expressed reservations about the trial process.