Due to the increa­se in the stray dog attack­s and hike in the people being admitt­ed in the hospit­als.
By News Desk
Published: June 18, 2018
Tweet Email 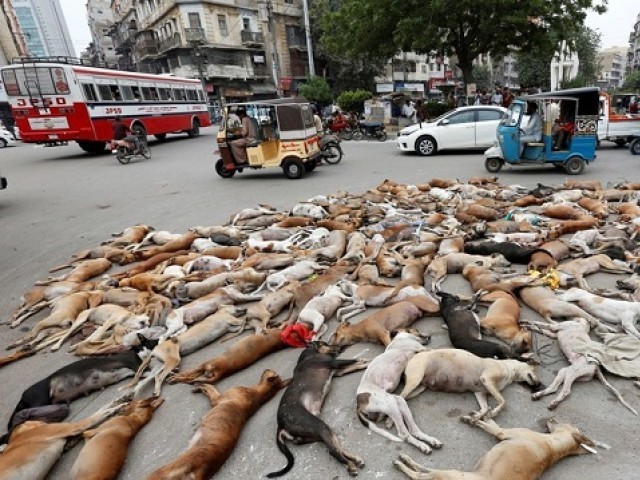 The carcasses of dead dogs in Karachi, August 4, 2016. PHOTO: REUTERS/FILE

A picture that dispersed all over social media of an alleged dog cull in Russia, actually depicts a drive which was carried out in Karachi in 2016 RT reported.

There were fears there that Russia would repeat history by exterminating dogs in time before thousands throng in the Country for the World Cup.

But to our surprise Deputy Prime Minister Vitaly Mutko said that the animals would be captured and placed in shelters.

However, all of this drew attention when a twitterati posted a picture that intended to show number of dogs lying dead in a street in Russia. A picture that does show a fraction of dogs but was actually taken in Pakistan.

Another twitterati by the name of Fabio also ridiculed at the use of Pakistan’s picture. The story circulates around how more than 700 dogs were poisoned.

Dude, I don't know if Russia would or wouldn't do something like this, but this picture is from Pakistan (source Reuters) pic.twitter.com/a55gUhy9TC

It became a necessity for Pakistan to conduct the dog cull in various cities in 2016 in attempts to secure the masses that live on the streets or walk by. Due to the increase in the stray dog attacks, many have to be admitted in the hospitals.