The system will travel the 17 miles from downto­wn to O’Hare
By Reuters
Published: June 15, 2018
Tweet Email 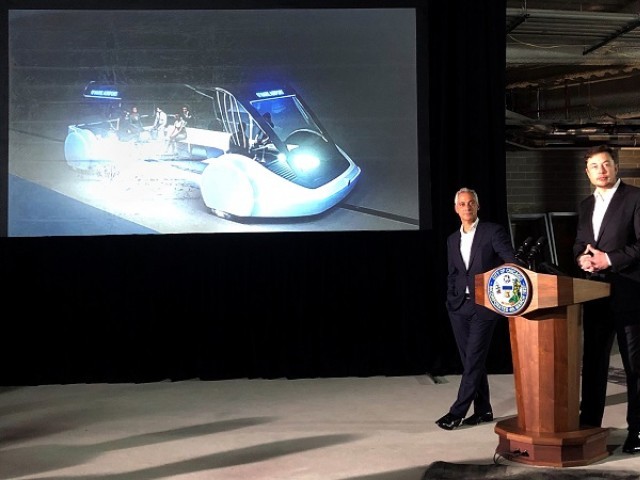 The system will travel the 17 miles from downtown to O’Hare, one of the world’s busiest airports, in 12 minutes, less time than it takes to get through airport security, Emanuel said at a news conference in an unfinished underground train station in the Loop that will be used by the system. The trip currently takes 30 to 45 minutes.

People will travel nonstop between the Loop and O’Hare in 16-passenger vehicles called “skates,” which will leave every 30 seconds, the Boring Co said.

The project is expected to cost around $1 billion, according to two people familiar with the plans. Emanuel said it will be funded by the company with no taxpayer subsidies, and added that in conjunction with O’Hare’s planned $8.5 billion expansion, it will fuel Chicago’s economic growth.

“Were there doubters when Chicago said we’re going to build the first skyscraper in America? Yes. Where are they today?” Emanuel said.

One Chicago politician did voice doubts.

Alderman Scott Waguespack, whose ward covers parts of the city’s north and northwest sides, said there are many unanswered questions and the project should be subject to a public hearing.

“Mayor Emanuel is prioritizing the interests of billionaires and big corporations ahead of the very real and immediate needs of Chicago’s taxpayers and neighborhoods,” he said in a statement.

Drilling for the project, pending regulatory and environmental approvals, could begin in as soon as three to four months, said Musk, who also founded and heads luxury electric car maker Tesla and rocket maker SpaceX. It could be operational 18 to 24 months after that.

“We’re super excited,” said Musk, adding he does not expect any problems raising capital for the project. He said the project was certain to cover operational costs, but whether it provided a good return on capital was a separate question.

Boring said the passenger fare will be less than half that of a taxi or rideshare, but more than the fare on the current train system. The system will operate 20 hours a day, seven days a week.

The Boring Co has been promoting its plans for Hyperloop tunnels that would allow high-speed travel between cities, such as travel from New York to Washington in less than 30 minutes.

Musk unveiled a plan last month in Los Angeles to build tunnels beneath the city for a high-speed network of “personalized mass transit,” promising to build it without disturbance or noise at the surface.

Two Los Angeles neighborhood groups have launched a legal challenge to Boring’s bid to win fast-track city approval of a 2.7-mile-long tunnel beneath a busy stretch of the city’s West Side.

The Chicago and Los Angeles projects come as Musk wrestles with production problems for the rollout of the highly anticipated Tesla Model 3 sedan. Some investors are concerned with his leadership roles at Boring and SpaceX have spread him too thin.